Madrid is an open, welcoming and accepting city, which makes it an ideal destination for lesbian travelers. From its strong history of LGBT rights to its massive lesbian party scene, the Spanish capital needs to be on your travel bucket list.

Madrid’s most famous gayborhood is called Chueca. Chueca has been the historical center of queer culture in Spain for the last thirty years. Over time the city became more open and accepting and the LGBT community has grown and moved beyond the borders of Chueca to other areas of Madrid like Malasaña, La Latina, and Lavapies. Chueca has the highest concentration of lesbian bars and LGBT specific venues, but more and more queer venues are opening in these other neighborhoods around Madrid. 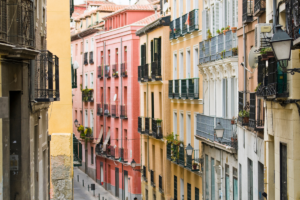 Lavapies aka Madrid’s hipster neighborhood is very popular with lesbians because of the multicultural vibes, feminist bookstores, queer venues, and emphasis on the arts. It doesn’t hurt that there are many restaurants, bars and stores owned and frequented by lesbians either. Some of the best lesbian casual restaurants and bars for lesbians are in the area. La Berenjena, which translates in English as ‘Eggplant’ [insert drumroll here] is a local restaurant that is run by Top Chef contestant, Rebeca Hernandez. The restaurant has a great wine selection and delicious foods. Interestingly while researching this article I found out that La Berenjena was recently in the media because a disgruntled male reviewer posted on TripAdvisor that he was uncomfortable with the number of lesbian couples dining, which is a nearly perfect endorsement in my opinion. Other options are Taberna el Olivar, El Gallinero, and El Mojito. Lavapies is also known for being the center of three very famous art centers La Casa Encendida, La Tabacalera and, of course, my favorite, the Museo Reina Sofía. The Reina Sofía is Spain’s national museum of 20th-century art, most of the works are by Spanish artists, it’s definitely worth the visit.

Madrid Has Tons of Lesbian Bars

Lesbian bars in Madrid are all over the place. Literally, they have the most bars and parties I’ve ever seen in one city specifically for queer women. There are several lesbian bars in Madrid.  So-and-so is a bit of a Madrid institution. They are open early in the day and stay open through late night hours. They host local women’s sporting events and they serve tapas. Escape is a lesbian nightclub in Chueca. It’s open until 6:00 AM and is a dance until you drop kind of place. Escape attracts a younger crowd than so-and-so, expect to find women in their twenties. Truco is right around the corner from Escape. It’s smaller in size and closes at 3:00 AM but still draws a great crowd. Club 33 is the oldest and most iconic lesbian bar in Madrid. Over the years it has been home to performances, protests, dance parties and functioned as a cultural center.

While none of these lesbian circuit parties are technically in Madrid, they’re all in Spain and a relatively short distance from Madrid. Girlie Circuit is Europe’s largest lesbian event. Held every August in Barcelona, Girlie Circuit draws huge crowds from around Europe. They also hold preview parties year round at different locations around Spain. Ella Festival is a more grown version of Girlie Circuit because they offer workshops, volunteer opportunities and cultural tourism alongside the beach parties and nightlife. They host two events each year one in Mallorca in the summer and one in Davos in the winter. Velvet Ibiza is hosted in one of Europe’s most famous party destinations and is 5 days of nightlife, ceviche, and queers from all over Europe.

One of the most incredible parts of the Spanish LGBT story is that in the 1970s Spain was a dictatorship where LGBT identity was not legal. In 40 years they’ve gone from a dictatorship to being the most LGBT affirming destination in the world. According to a 2012 Pew Research Center study, 92% of Spanish citizens accept LGBT people. Marriage equality was passed back in 2005. They even offer government assistance in starting a family and cover it under their national health care. For more on LGBT rights in Spain.

The FOOD is Everything

What’s not to love about a country that has cava, tapas, and churros? When I was in Madrid this summer I went to Diurno a hip restaurant right in the heart of Chueca for my favorite meal of the week, brunch. For $17 euros you can get a prix fixe brunch that comes with a cocktail or freshly squeezed juice of your choice plus a main entree, a desert, and it even comes with a cup of coffee – which I really needed the morning after pride.

While I was in town I popped into Anos 23 a small LGBT bookstore in Chueca. I started chatting with the owner of the shop and she had some very interesting things to say about how Madrid has changed over the years. She started the store 23 years ago when there was no access to LGBT themed media. This was well before blog posts and many mainstream bookstores refused to carry LGBT books or magazines. When they opened there were only 4-5 lesbian books in Spanish. Now there are references to LGBT people everywhere. Anos was the first LGBT business opened during the day in Madrid. Shortly after they opened they created a gay map in 1995 to help LGBT tourists explore the area and visit LGBT locations. The businesses in the area become more open about being LGBT establishments and eventually started working with the government in partnership to develop LGBT affirming laws and policies. The opening of the bookstore changed a lot of things in the area – it was basically a domino effect on visibility. While you’re in Madrid, come back to the small bookstore to support LGBT owned businesses and authors.

One of the best ways to find queer women while you’re on the road is to use apps to connect with locals and find out tips and information on where to go. It’s geotargeted like Grindr so you’ll see the queers closest to you. Wapa helps you find gay and bi girls nearby. The app is pretty unique because it’s like a cross between a dating app and snap chat. You can send 60-second video messages and they have an auto-translate feature that helps you sort out the language barrier in messages.

I’ve been in Spain for Pride a few times and each time it’s absolutely incredible. Madrid’s pride takes over the whole city with events, parties, and activities in different neighborhoods. The Parade is at night and many of the floats include lights and music displays.

Spain has two lesbian magazines, Mira Les and Mag Les Revista. They’re a great source of on the ground information from locals. MiraLes even did a cute little shout out to us a few years ago. That’s how ya know they’ve got good taste.

Other Resources for Lesbians in Spain