Why I Won’t Ride an Elephant

People all over the world have grown up seeing exotic animals. We buy stuffed toys made in their likeness. We watch cartoons personifying them. We even go to visit them on school trips to the zoo. It’s natural for tourists to be curious about them when visiting their native lands. Our fascination causes elephants, tigers, and other exotic animals to be big business in tourism. A few years ago the world exploded over the murder of Cecil the Lion, and demonized exotic game hunting but few people realize how awful other forms of animal tourism can be for the animals we’re so fascinated with.
I’m a travel writer who has spent a significant amount of time in Asia. As I prepare to lead a group trip of lesbian travelers to Thailand, I felt like I should address a few important issues. By the way, we still have room on our LGBT trip to Thailand,  if you’re interested in joining us.  At times, readers ask me if I’ve visited elephant parks. I’m always hesitant to answer that question because of the complexity of the issue. Visiting animal based tourist attractions is controversial. Lots of developing countries depend on tourism to support their economy. Businesses cater to the desires of the tourists. But more often than not, the animals are abused and starved due to a lack of resources.
I knew the controversy surrounding animal tourism when I visited Chiang Mai, Thailand. I decided to skip Tiger Kingdom due to the experiences one of my colleagues at the Matador Network wrote about and instead visited Elephant Nature Park. 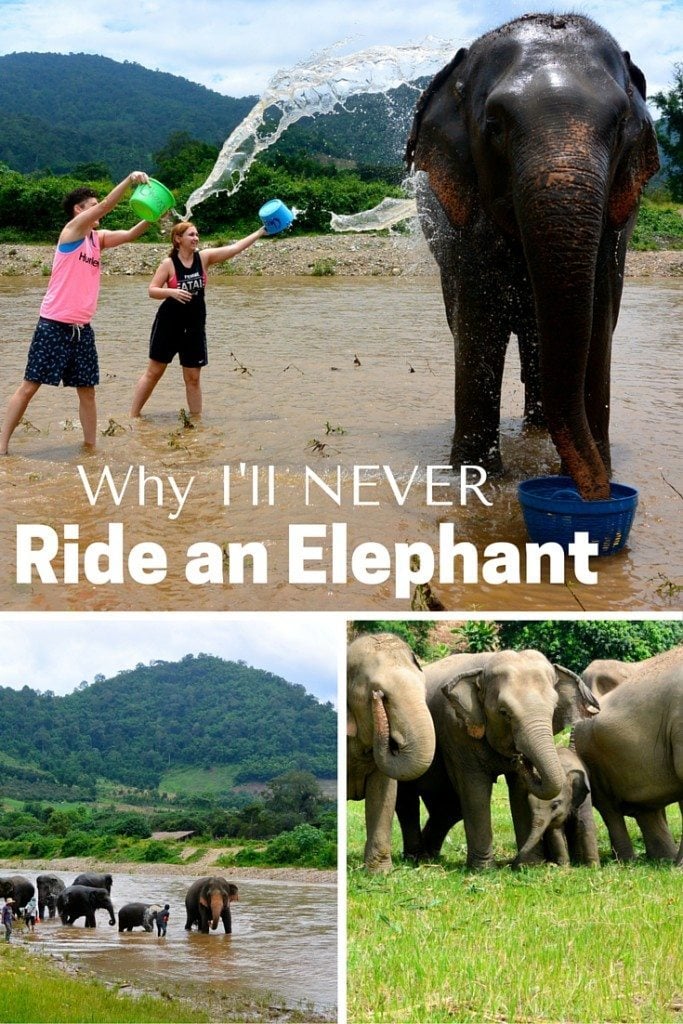 Elephant Nature Park is a unique animal tourism destination because they offer sanctuary for elephants and serve as a rescue for abused, neglected and abandoned elephants. ENP sits on a large tract of valley land and is home for the 39 elephants at the park. The elephants roam around the valley in herds of their choosing.
The park’s founder, Lek Chailert has purchased abused and disabled elephants from their owners. Elephants are considered property in Thai law. By using the park as a tourist destination, she’s able to raise the money to legal purchase more elephants and maintain their quality of life. The park’s current herd includes rescued elephants of all ages. Lek saved most of the elephants from street begging, logging, or tourism. Some grew too old to work, others suffered injury at the hands of humans and some survived trekking camps.
I had the opportunity to meet Lek and learn the stories of individual elephants.  She introduced me to Lucky, a 43-year-old circus elephant. Lucky was deliberately blinded by her owner and rescued by ENP years ago. I also met Pornsawan. She is a 22-year-old elephant who worked in an illegal logging camp. In 2011, she stepped on an active land mine and blew her foot apart. After major reconstructive surgery, Pornsawan lives an active life with her herd at ENP.
The issue of animal tourism is complicated and nuanced. It’s an issue of cruelty to animals, but it’s also an issue of social justice and economics. The average weekly income of a Thai person is $87 USD. Tourists from wealthy nations line up in droves to take photos with elephants at $20 USD a piece. Supporters believe that the use of animals in tourism is justified because it supports the local economy and brings money back to the community. Economic development dramatically improves the quality of life in developing countries like Thailand, Cambodia, and Laos. Elephant tourism is going to continue as long as there is profit. The profit isn’t the controversial part; it’s the exploitation and abuse of the animals. 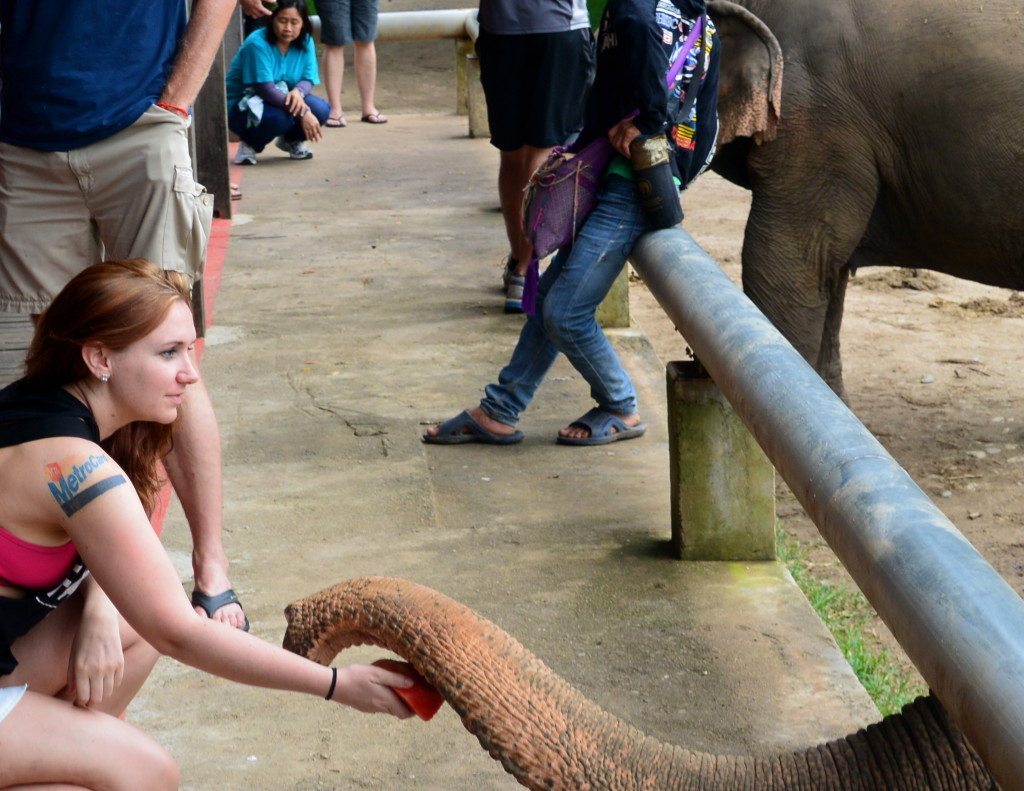 During my time at ENP Lek explained the role elephants play in Thai culture. She respects and understands the cultural ties elephants have to villages in Thailand. She also understands the economic needs of the Thai people. Lek spoke to the importance of preservation and conservation of elephants and their habitats. Elephants are considered livestock in Thailand. They fall under agriculture policy, so Thailand has few specific laws protecting them. Elephants are still a major means of making a living. They do everything from plow fields in small villages to offering a means of transportation. After mass flooding occurred due to deforestation, Thailand banned logging in 1988. After the ban, thousands of domestic elephants were out of work with no land to live on.
In a perfect world, elephants would return to their natural habitat. Unfortunately, domestic elephants lack survival skills in the wild. There is also a huge shortage of land and food. Asian elephants are herbivores and eat about 330 lbs of fruits and veggies a day. When wild elephants cannot find food, they steal produce from farmers’ crops. Most of Southeast Asia is still rife with poverty. An elephant herd eating crops is an issue of life and death to the people of some communities. If the herd eats the crops, the villagers do not have food or income for the coming season. Farmers shoot the elephants to protect their livelihood. Domestic elephants do not learn how to forage for food in captivity. When they return to the wild, they often die from starvation and poaching.

Lek and her team are calling for reform and a new kind of elephant tourism. To lead by example, Lek offers the opportunity for tourist to volunteer at ENP. Tourists can pay to spend time improving the quality of life for the elephants. We helped to feed the herd watermelons, bananas and squash by the tons. We helped to bathe them in the river with splashing buckets of water. Volunteers even do less glamorous chores like shoveling elephant poop and cleaning up. 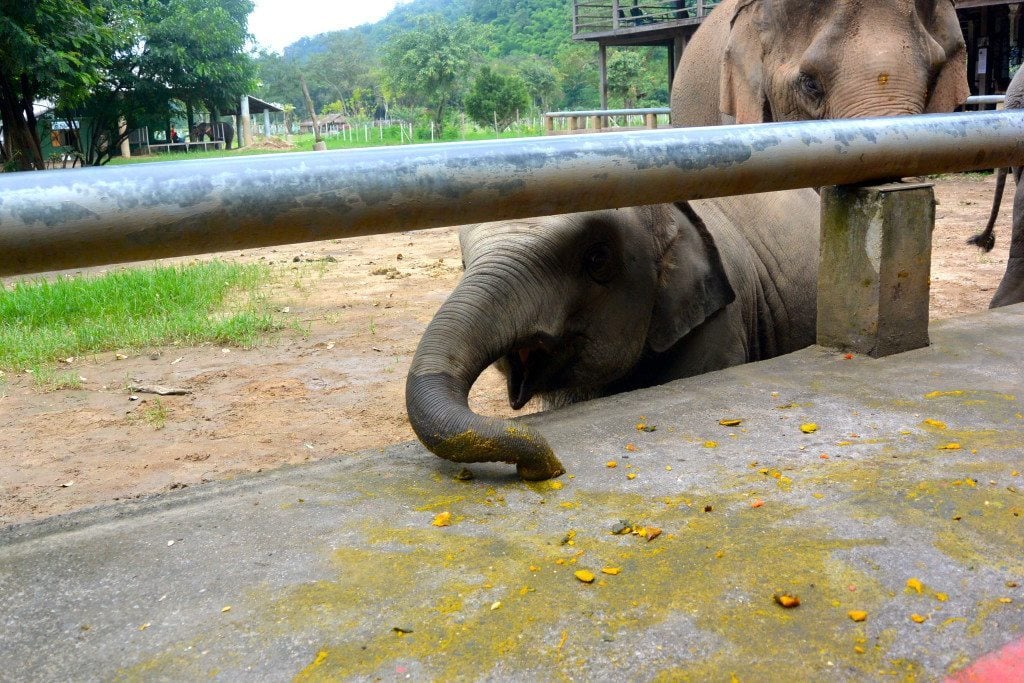 A baby elephant sneaks a bit of leftover squash.

During downtime, we watched documentaries and learned about the history of the elephants and how tourism impacts policy and animal rights. After watching an elephant endure Pha Jaan, I knew I would never ride an elephant. Pha Jaan is the technique used to “train” elephants. Pha Jann literally translates to “crush”. Trainers put baby elephants in tiny cages. The trainers beat, starve and force the baby to stay awake as a means of training. The trainers beat them until they accept humans as dominate. Some tourist attractions offer rides and trekking with elephants. Others sell elephant made paintings and force them to perform in shows. Elephants will only perform these tasks when they have been beaten into submission. Some vendors will also sell products made from Ivory. Ivory is illegal because it comes from dead elephants. Sometimes vendors will tell tourists that Ivory comes from live elephants, this isn’t possible. When the tusks are removed from a live elephant, it causes an infection that will eventually kill the elephant.
If you are planning to take part in animal tourism, please research the facility. Do not visit facilities that offer elephant rides or use hooks. Recently, there has been a lot of negative media on animal tourism sites. Owners are getting wise to this and marketing themselves as “animal-friendly” when in reality there is no regulation or accountability to back these claims. When tourists don’t thoroughly research the facilities they take the owner’s word at face value and then end up contributing to the abuse of the animals. If you are interested in elephant eco-volunteering please consider visiting one of these three ethical elephant sanctuaries; Baan Chang Elephant Park, Boon Lott’s Elephant Sanctuary (BLES) or Elephant World.
For more information visit Elephant Nature Park.
Tweet
Share22
Pin29
51 Shares