This week on Queers You Should Know, We’ve got Olympic Weight Lifter and Crossfit Games Athlete, Emily Buckley.

1. Hey Emily… tell us a bit about yourself.

Well, I’m 26 years old and from Brooklyn, NY.  My life entirely revolves around working out.  I work full-time coaching at a Crossfit gym.  I run group classes, do personal training, as well as offer online training to remote clients. I actively compete in Crossfit and Olympic weightlifting. I’m an extremely old soul and love country music.

How the hell do you find time to work out as much as you do?

I work in the fitness industry. Plus, I’m really really focused right now on my training and working as a fitness professional full-time allows me to put in two training sessions a day.

Damn girl, two a day? I’m lucky if I walk to the kitchen and back. How long do you spend working out each day?

Each training session is about two hours. I do one in the morning and one in the evening. 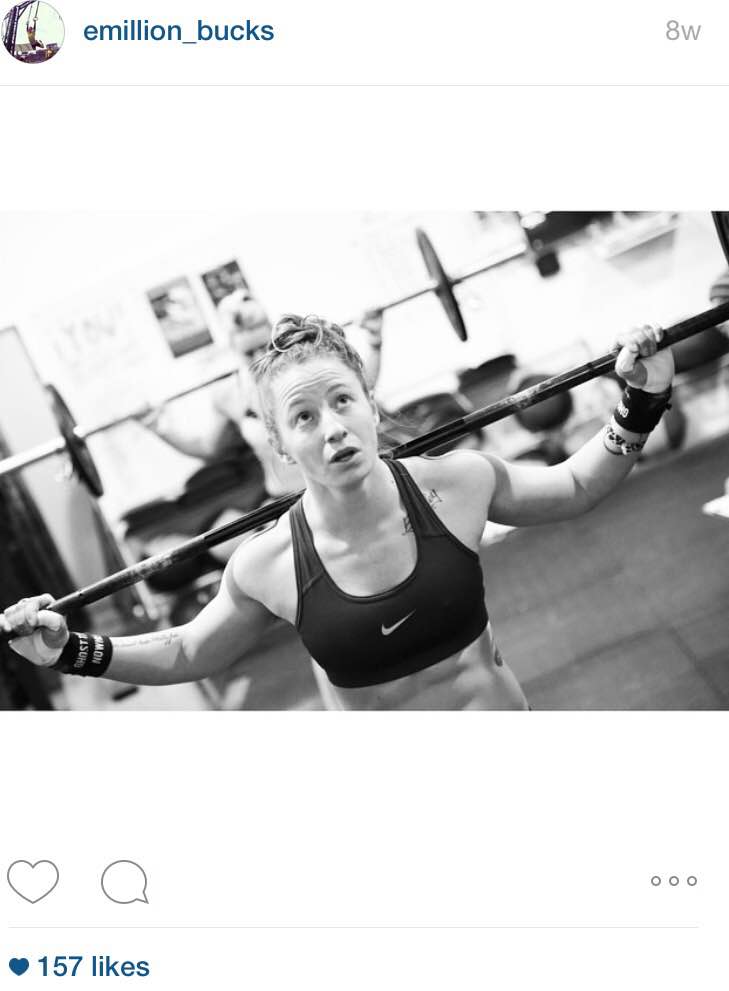 Oh wow, that’s intense. Are you training for Crossfit or for the Olympics?

Both, for the 2015 Crossfit Games, they made the qualifications a bit stricter. They cut the number of teams they accepted in half. Last year they took 30 teams, this year only 15 teams were accepted. My team finished number 22, so we didn’t make it this year. We have a handful of Crossfit competitions coming up, but right now, I’m focusing on qualifying for the Olympics this summer.

Were you heartbroken when they changed the rules?

I wasn’t upset about the rule change. As the amount of athletes who compete in Crossfit worldwide increases, so do the standards for performance. I’m all for encouraging the highest level of competition, but yes, I’m a little disappointed that we didn’t make it. I love Crossfit, I love the variety of it. The constant mystery of what it’s going to be. I love my teammates because we kill ourselves together in training every day. Competing last year in the Crossfit games was an incredible experience that I am grateful to have been a part of. It’s a humbling experience to compete against some of the most fit athletes in the world. Less than 1% of the Crossfit community make it to the games and I was lucky enough to have been included as one of the few. 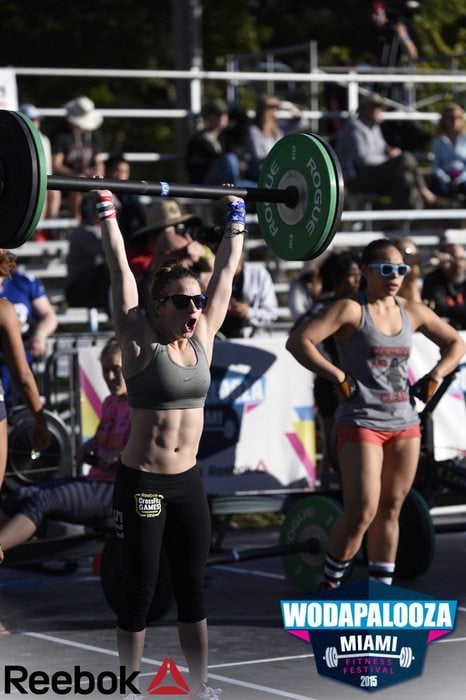 Buckley, you’re like what 4’3? and 75lbs? We’ve talked about the advantages and disadvantages you have in each sport before, can you speak a bit about that?

Hahaha I’m 5 ft tall and 112lbs thank you very much. I’m very small for a Crossfit athlete, so I have an extreme disadvantage. Take a Crossfit workout for example that has a movement with 135lbs. That would be 20lbs over my bodyweight, but for the average Crossfit competitor that is 5’6 and 140-160lbs, that’s 20lbs less than their bodyweight. So they’d have an edge over me. That same disadvantage gives me an edge in weight lifting. It’s done by weight class so I compete against people at similar body weight to myself. For my size, I can lift a lot. Right now, I’m 20th in the country in my weight class.

HOLY shit?!? 20th in the country? That’s amazing. America is a BIG country.

hahaha Yeah, I guess you’re right, but I’m a competitive person, so I’m always looking to improve. I did my first weightlifting meet and did well enough to qualify for the American Open and Nationals, which are two meets that begin your journey to the Olympics. I placed 20th at the American Open. Which isn’t bad but not worthy to get looks at for an invitation to the Olympic Training Center. I’m on the line right now between two weight classes. The weight class I competed in is 53kg, if I had cut weight to the 48kg class, I would have placed 5th. At the American Open, I weighed in at 50kg at the meet, so I could have easily cut to 48kgs and placed 5th which is a way more impressive finish. 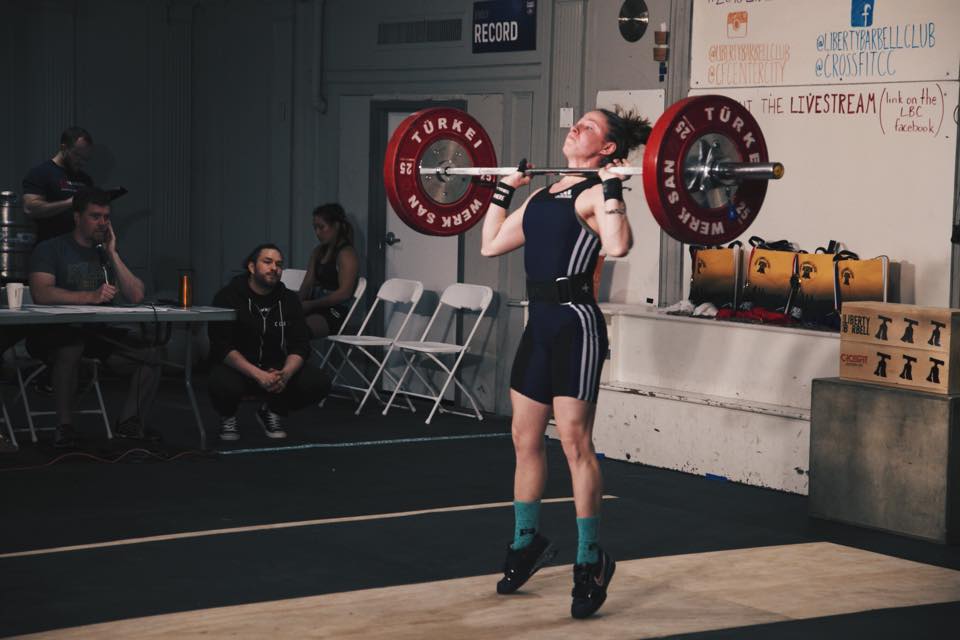 Is that your plan for the next meets? Are you going to cut weight?

Yes, I have two meets coming up this summer. I’m going to cut for the first to see how I perform at a lower weight, then I will make the decision for the second meet based on my performance at the first meet. 48kg is 105lbs and that’s tiny. It’s really difficult to maintain a 125lb snatch and 170lb clean and jerk at that weight.

I feel you, 105lbs is like the weight of one of my boobs. I’d have to amputate a leg to get that low. Not that I’d want to, I dig my curves. I think it’s awesome that you’re so invested in your sport. Do you think being an Olympian is a realistic goal for you?

To be an Olympian is everything I dreamed about as a kid. I’d watch the Olympics on TV and get chills seeing them compete.The journey to the Olympics is a very long road. Usually, top 5 get asked to go live at the Olympic Training Center. It’d be an honor to be included amongst their ranks. I’m going to compete at my peak performance and hopefully my best effort will meet my goal. 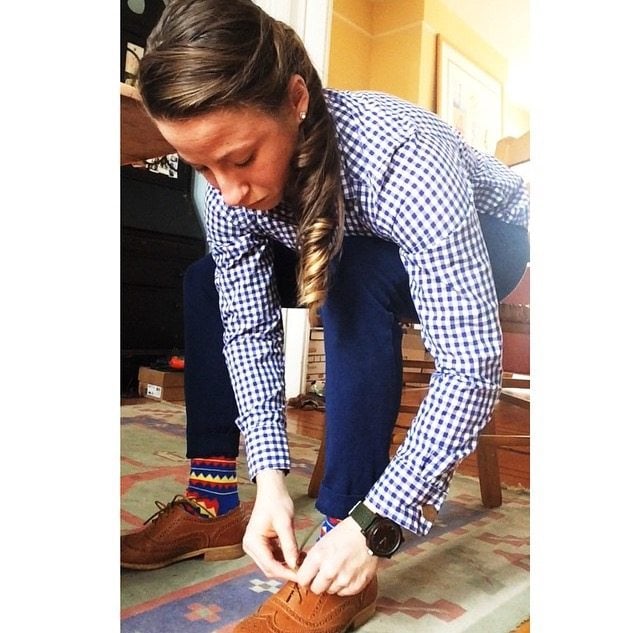 You’re a CrossFit athlete, you’re an Olympic weight lifter & an all around babe. Which one of these comes first in your mind? Are you a cross fitter who does weight lifting? Or a weight lifter that does CrossFit?

I really do love both.  For right now, I’m a Crossfit athlete who does weight lifting. As both sports continue to grow and more people start competing, I think the natural shift will be towards Olympic lifting as I have more of a chance of being successful in that.

What is the biggest accomplishment you’ve had in your athletic career? What are you most proud of?

I have two answers for this one, for two different reasons.  My first most proud accomplishment: I was recruited in college for soccer, played 4 years.  During my Junior year, I was approached by the head lacrosse coach at my school asking me to come out for practice. She swore that my speed, competitive nature, and work ethic would make me a great player. At the time, the lacrosse team was ranked 3rd in the country and I had never even watched a game, didn’t know the rules, and certainly couldn’t throw or catch the ball.  So this was a huge leap of faith taken by the head coach to bring me on.  I ended up earning a starting position after an unreal amount of hours spent by myself practicing against a wall. I played both soccer and lacrosse my junior and senior year, and then the lacrosse coach asked me to use my 5th year of NCAA eligibility to play.  So I stayed, got a scholarship and earned my Master’s Degree. I’m extremely proud of that and really shows me that if I work hard at something, put in the countless unglorified hours, I can literally do anything.
My second most proud accomplishment is competing at the CrossFit Games because that was an unreal experience flying out to California competing next to the world’s fittest athletes for 5 days.

If you had to choose, gold at the CrossFit games? Or gold at the Olympics… what would you pick?

Tough choice.  I live and breathe Crossfit all day every day.  I love it entirely, It’s a lifestyle and a culture, so to be ranked at the top of that would be incredible. But- an Olympian? That’s what you grow up wanting to be.  That’s staying up late as a kid when you’re supposed to be in bed just to watch the opening ceremony and having chills. That’s doing crunches in your bed because you can’t sleep you’re so excited to train, workout and practice. To be an Olympian would be everything to me.