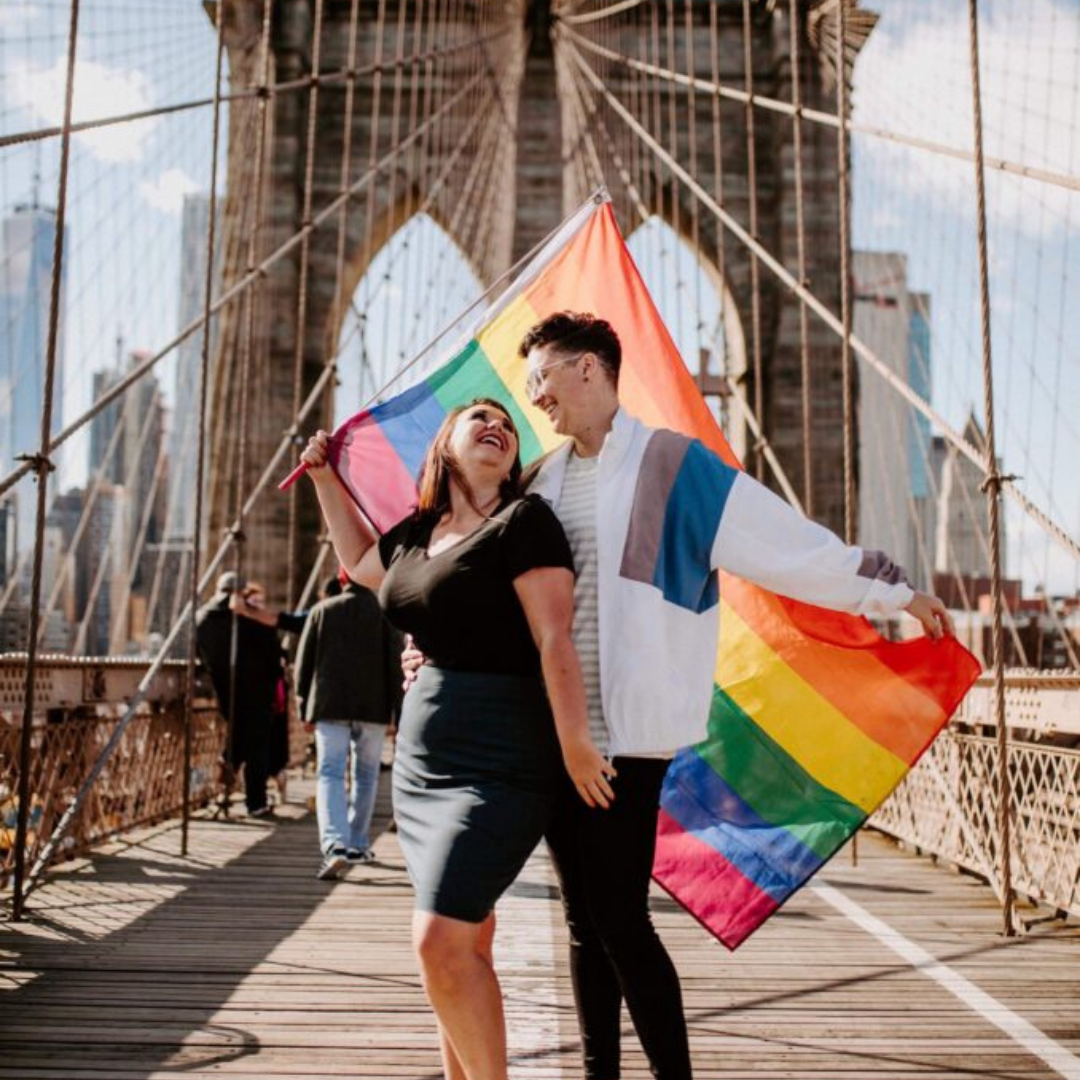 I’ve talked at length about my unique situation growing up poor, I wasn’t born in NY but I lived there longer than any other place in my life. I consider myself a New Yorker not just by zip code but by personality. I wasn’t born in New York but I found myself there. I had the personality of a New Yorker before ever realizing there was an entire city of fast walkers and fast talkers just like me. For me, New York City is freedom. In NYC I can be as queer and as ambitious and as femme as I want to be. Which is why I was pumped when Hilton reached out to us asking if we wanted to return to NYC ahead of World Pride 2019 to create some content for travelers looking to extend their Pride celebrations a few extra days to explore the greatest city on earth.

The hustle and bustle of New York City alongside the lights, the sounds, and never-ending the attractions create one of the most unique cities in the world. While it’s impossible to see and explore all of NYC in just a few days, I pulled some of my favorite tourist spots and put them alongside some local gems to create a unique itinerary designed for queer travelers exploring the big apple. I love coming home to visit NYC because it is unlike anywhere else, each visit is slightly different depending on the area you’re exploring and it’s always changing. No matter how long I stay in NYC, I never feel like I’ve had enough time because there are so many things to do but this post boils down the highlights to just a few days. You might feel like this is a packed itinerary – that’s because it is, I’d recommend selecting a few stops from each section and drafting your trip based on the things you’re most interested in seeing. Without further ado, here is a three day queer NYC itinerary that allows you to see the most in the least amount of time.

Where to Stay in NYC

There are a million different hotels in NYC so it can be super tough to choose the best one for your trip. We like Hilton hotels because they offer a variety of different options within their 14 different brands and at a variety of price points. One thing that’s always true with Hilton is that they’re affordable, consistent, and conveniently located. You know what to expect with a brand like Hilton, there will be no unfortunate surprises when you check in. We selected the Hilton Fashion District because of its incredible location in Chelsea and it’s upscale rooms with amazing views. The Hilton Fashion District also has a gorgeous rooftop bar, that has panoramic NYC views. The roof deck is open year round and has heat and AC – which was amazing for our still slightly chilly April visit. They also have a beautiful restaurant and bar downstairs called RARE. But the big selling point was the easy access to Midtown Manhattan where we spent a large portion of our time on this trip. It’s near major train stations like Grand Central and Penn Station plus, only blocks away from Madison Square Garden, Broadway, and Chelsea Piers. The service was super friendly, and they didn’t bat an eyelash when we checked into a room with one bed. Hilton has been a leader in LGBT friendly tourism for both travelers and employees which makes it a great choice for romantic getaways for LGBT couples

While I’m all for exploring the local spots in big cities, if this is your first trip to NYC there are just some things that are iconically New York that you have to experience. Like Time Square for example, most locals avoid the area like the plague but if you’ve never been and you don’t have a strong aversion to very large crowds you really should check it out. After your Time Square visit, wander east down 42nd street and head towards Bryant Park and Grand Central Station. They’re both beautiful locations to take a few photos.

While you’re in Grand Central grab a cup of coffee before heading back towards Fifth Avenue. Wander in and out of some of the most famous fashion houses in the world before making your way up to the corner of 5th Avenue and 59th street where you’ll find Central Park. You could spend an entire day exploring the park and may want to depending on your time constraints and the weather but the highlights are definitely Strawberry Fields, The Sheep’s Meadow, and the street performers gathered around each entrance. For lunch, we popped into Koreatown to enjoy some KBBQ.

After you’ve explored Central Park head back to 30 Rock which is home to NBC studios and Top of the Rock Observation Deck. You’ll want to get there with plenty of time before the golden hour so you can pose for photos 63 stories above the ground. On one side you’ll see views of Central Park from above and on the other, you’ll see the Empire State Building, Chrysler Building, Freedom Tower and all the way down the island to NJ on a clear day. The day we went ended up being a bit stormy but we made the best of it and were able to snag a few photos of the iconic NYC skyline. After you’re finished at Top of the Rock head back to Hilton Fashion District to change and grab dinner at RARE the hotel’s beautifully appointed restaurant before making your way uptown to catch a showing of The Prom on Broadway. The Prom is the story of a young lesbian who just wants to take her girlfriend to the school dance after Prom gets canceled and her story goes viral, she gets mixed up in a PR plot of some famous Broadway performers. It’s heartwarming, hilarious, and beautifully fun.

Bright and early to avoid the major crowds, head to the Brooklyn Bridge. If you’re brave, try to make it for first light. There’s literally nothing more glorious than watching the first rays of sun hit the skyline from the middle of the bridge. I’m the definition of not a morning person so we tried to do it for sunset and mostly just ended up fighting the crowds for our photo opportunities. Lesson learned. After walking the bridge head up to the South Street Seaport. They have a beautiful viewing platform where you can see all three bridges, the Brooklyn, Manhattan, and Williamsburg Bridges. Also located in the Seaport is one of the locations of New York’s iconic Big Gay Ice Cream. Go big and grab a rainbow sprinkles cone. Don’t forget to pose on their adorable popsicle benches out front and see all the adorable queer details inside like the drag queen stiletto tip jar and unicorn references.

While you’re still in the financial district head over to wall street to pose with the Bull of Wall Street or down to One World Trade and 9/11 memorial museum to pay your respects to the victims of the 9/11 terrorist attacks. Both stops are pretty intense so pack some tissues if you plan to explore the museum. After the museum head uptown to the Soho area and grab lunch at Pietro Nolita arguably one of the most instagrammable restaurants in NYC. After lunch browse the street art, boutique shops, and adorable bubble tea shops throughout SoHo and the Lower East Side.

Head slightly further uptown to the iconic Greenwich Village. Grab a drink at the Stonewall Inn and visit the Stonewall riots memorial just out front of the bar. Wander down Christopher street and stop for photos at the gayest corner in the world, yup, I’m talking about the intersection of Christopher and Gay. Have dinner at LGBT owned local favorite, Elmo in the heart of the west village. If you’re down for some additional nightlife check out Henrietta Hudson’s, Cubbyhole, or Hot Rabbit.

Day 3 in New York City is all about Brooklyn Baby

Williamsburg is the hipster neighborhood in Brooklyn that draws the young and the trendy to its chic boutiques, adorable cafes, and boozy brunches. Like every big city across the world, Williamsburg has changed quite a lot in the past twenty years due to gentrification. Since the late 1990’s, Williamsburg has undergone a staggering amount of renovation but be mindful that Williamsburg is an area where many local people live, work, and experience life. While there are unfortunate consequences of gentrifications it’s also resulted in buildings being renovated and shiny new high rises being built. Along with these changes there also came an influx of artists, musicians, and a vibrant culinary scene. It’s one of the most colorful areas of New York and has something interesting on every corner. Check out a few of the local boutiques, browse the shelves of Buffalo Exchange and Brooklyn Industries then wander into Brooklyn Winery for a wine tour or if morning alcohol isn’t your speed head over to MatchaBar for a fancy latte. When you’re tired of browsing stop for brunch at the Meatball Shop. You won’t be disappointed. 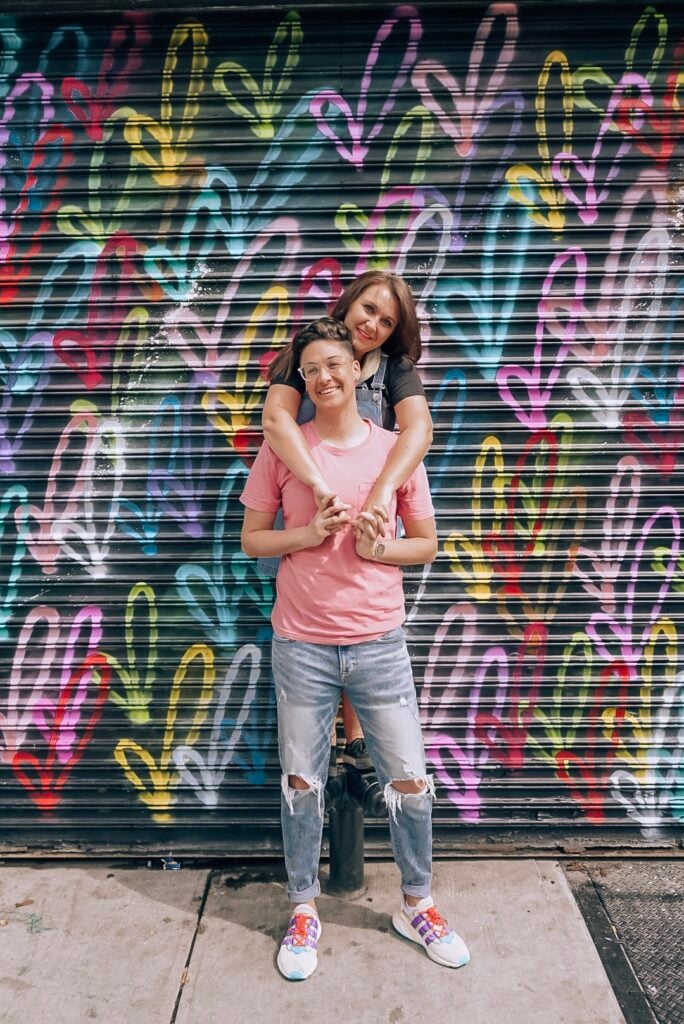 After you’re done having lunch grab your camera and head to Bushwick. One of the coolest things about Bushwick is all the amazing street art. It’s literally everywhere, from more commercial pieces to local artists you’ll find it all over the streets. The Bushwick Collective is a neighborhood open-air art gallery that was created as a response to the whitewashing of 5pointz. Located just off of Flushing Avenue, the neighborhood is quintessential local Brooklyn. Bring your camera and make sure you’re photo ready because you’ll love wandering the streets searching out your best Instagram moments. 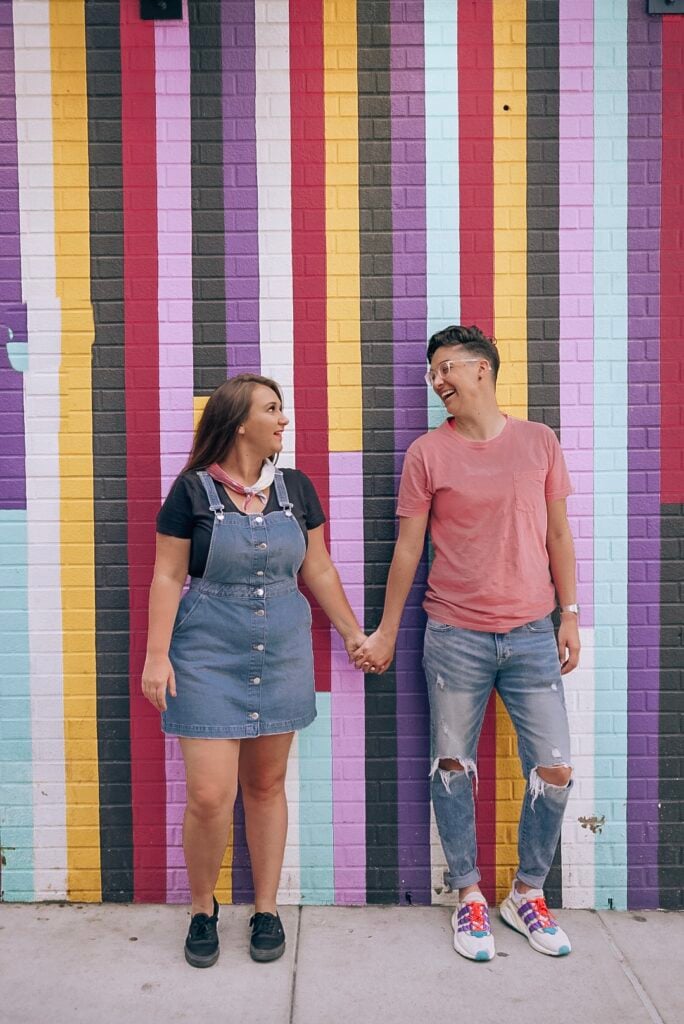 It wouldn’t be a complete day in Brooklyn without a bit of a taste of Brooklyn nightlife. The House of Yes is repeatedly considered Brooklyn’s wildest nightlife venue. It’s not like other clubs like I’m talking Time Out released the 50 best things to do in the world, and House of Yes was number two. It’s a funky venue that celebrates the weird, quirky and queer through dance, circus, theater and cabaret performances in a former ice warehouse. Be forwarned costumes are required and there is always a bizarre theme, luckily they have a costume cabin set up on site where you can pick something wild to wear from their stock.

New York City is a city so large and packed with options that’d it be impossible to do everything in your first trip. Remember to take it easy, wear great walking shoes, and experience one of the greatest cities on earth with the eyes and heart of an eager child. Want to learn more about New York in time for World Pride? Check out some of our other posts for your travel plans:

Meg Ten Eyck is a queer gal with expensive dreams and a whole lot of hustle. Meg is extremely gay and entirely addicted to travel. Like, we're talking Pride Parade gay - if they made a Meg Barbie her one accessory would be her rainbow flag and a copy of the feminist manifesto - THAT kinda gay. You can find her traveling the world or through her writings and ramblings @MegTenEyck
PrevPreviousUltimate Guide to Lesbian Dating Apps to Meet the Girl of Your Dreams
NextHow to Spend the Perfect Weekend in Oxnard, CaliforniaNext