Why We Need LGBT Tourism

Recently, my article  8 Questions LGBT Travelers Should Ask Before Going Abroad went viral. LGBT activist and actor, George Takei, posted it to his Facebook page with nearly 9 million followers. At the time of this posting, it had well over 8000 shares on Facebook, 500+ comments on his Facebook page and well.. A LOT… of page views.
As I read through some of the comments I started to see a pattern. Lots of people were commenting “why is this even an issue? Just don’t have sex or make out in public”. There were even a few commenters who compared taking off your shoes in a Buddhist temple to being closeted while traveling. Insert deep eyeroll here. Some even went on to suggest that we should be closeted while traveling because it’s “respecting other cultures.” Several other folks remarked that they thought it was morally wrong to travel to countries that do not support LGBT people because the country would be benefitting financially from tourism. 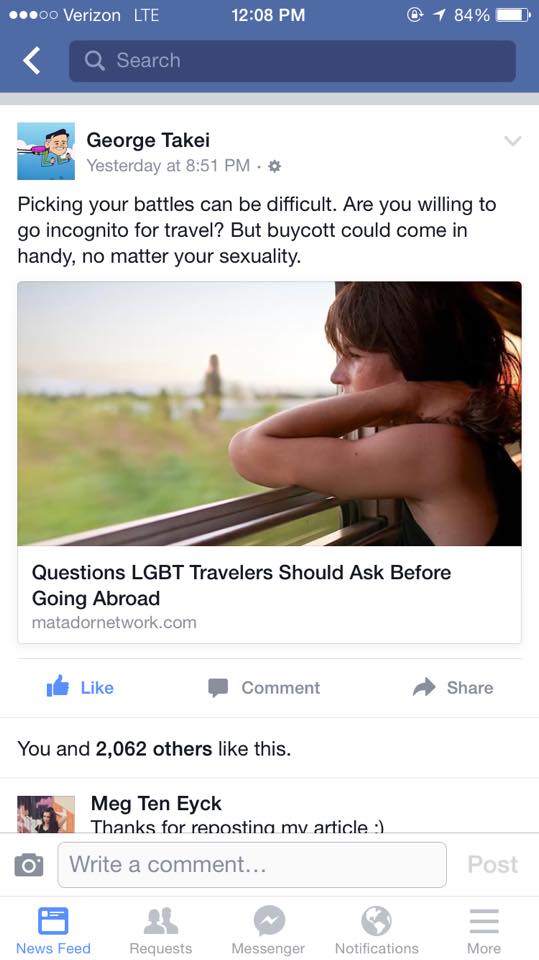 The bewildering tone of some the comments got me thinking back to International Gay and Lesbian Travel Association conference I attended in the spring. The conference was filled with people who are interested in learning about and investing in LGBT travel. The question most business professionals were asking were coming from the same place of misunderstanding echoed in the comments. In an effort to set the record straight (pun intended) I’ve organized my thoughts on why we need LGBT tourism.

Studies by Caitlin Ryan’s Family Acceptance Project show that being able to identify someone who is LGBT reduces homophobic words and behaviors. Melissa Langley a  lesbian travel blogger says that LGBT tourism has a twofold effect. “LGBT tourism exposes LGBT people to the world and the world to LGBT people. It’s a mutual beneficial relationship that can help local communities boost their economies while simultaneously correcting bias and stereotypes.” We need LGBT tourism because LGBT people are still at a high risk for violence and discrimination around the world.  Strength in numbers is a cliche, but it’s also true. LGBT people are being killed and experiencing hate-motivated violence. We saw this during Kiev Pride, in the IS executions of LGBT people and in the numerous murders of trans women of color in the United States. Exposure to LGBT people creates empathy and educates communities about the lived experiences of LGBT individuals.

LGBT Travelers are a diverse and nuanced community.

Many people assume that LGBT community is made up of largely gay white men with high paying jobs. These are stereotypes based on heteronormative images. LGBT people are a diverse group. David Paisley and Thomas Roth of Community Marketing spoke at IGLTA about the diversity of LGBT travelers.
Statistically, LGBT people tend to travel more than their straight counterparts, but it would be a mistake to assume that all LGBT people have large amounts of disposable income. LGBT identity is intersectional and we are just as much impacted by gender, race, ethnicity, social class and ability as any other group of people.
LGBT people fall into all of the categories of travel. We are backpackers, luxury resort enthusiasts, festival goers, family travelers and everything in between.
No single person can be representative of a collective of diverse people. The same goes for marketing campaigns targeting LGBT travelers. What appeals to urban white lesbians may not appeal to the suburban black gay male dads. Some LGBT travelers would prefer to tour in groups of their own and others would rather blend into the more mainstream crowd. Work on marketing campaigns that respect the diversity in our community and you will see an increase in sales.

There is a link between policy, cultural acceptance and the pink dollar.

The de-criminalization of LGBT identity in countries around the world has lead to the opportunity for LGBT people to experience other cultures more comfortably. Marriage equality in particular, has lead to a whole new market for LGBT travel.
According to a study conducted by former New York City  mayor Michael Bloomberg, marriage equality lead to $259 million in economic impact and another $16 million in direct revenues to New York City in the first year alone.
Community Marketing discovered that 29% of LGBT people are frequent travelers. We take five or more trips a year and our rates of travel have increased by 9% in the last year despite the sluggish economy. With LGBT travelers paying  an average of $259 a night for a hotel stay, being welcoming and affirming of LGBT people can have huge benefits on local economies.
That being said, tourism boards and industry professionals should realize that encouraging LGBT travelers to visit an area without the necessary safety precautions can have devastating consequences. The campaigns have to include marketing, local education and sensitivity to the community.

Most people cannot hide their identity

Identity is an intrinsic part of who we are. Some LGBT people, particularly those who are gender nonconforming or transgender may not be able to pass as straight and cisgender.
My wife is 6 feet tall, wears men’s clothing and has short buzzed hair. Even if she put on a dress and pretended to be straight, people would read her as gay. Identity goes well beyond the clothing we wear or if we engage in particular physical activities.
Even someone’s mannerisms and voice can be read as gender nonconforming and out them as a member of the LGBT community. It is nearly impossible to hide all of these subtle traits when visiting another country. Even if someone could, can you imagine having to be constantly worried about how you’re perceived in order to stay safe? That’s not an enjoyable vacation at the least or panic attack inducing at the worst.
While it is important to be respectful of other cultures by doing things like taking shoes off inside temples or wearing a head wrap in a mosque. Educating tourist destinations about the realities of LGBT travelers helps to encourage empathy and understanding and prevents instances of violence.

Sometimes I want to have a conversation with folks where I don’t have to explain that I’m queer. We can engage with people who “get it” without having to focus on educating others about identity.
I recently had an exchange with someone where I mentioned my girlfriend in the flow of our conversation. The person I was talking to then felt the need to let me know how much she supports marriage equality and that she’s definitely not homophobic but sometimes her parents are and she always tells them to knock it off.
I loved that she felt so passionate and supportive. However, she wasn’t well versed on the topic and my basic human rights don’t feel like an appropriate small talk conversation in the first five minutes of meeting someone.
Sometimes, I just want to have a good time and not feel obligated to create teachable moments with those around me. It is not the responsibility of the oppressed to educate the oppressor, but because I’ve positioned myself as an activist all these years, I feel like I fall into a unique category of obligation.
At times, I just want to get my drink and get my dance on and not worry about the patriarchy for a moment, especially when I’m traveling. You know what? THAT’S OKAY.

LGBT Travelers may want to find the local LGBT community

When I’m researching for a trip, I always investigate the LGBT nightlife and hot spots in a city. I want to meet local LGBT people and experience what their community is like. In some cities this is as easy as going to the local gayborhood and stopping in the bar with a rainbow flag. In other cities it takes a lot more effort and local experience.
I’ve been on trips before where I felt guilty asking my straight counterparts to seek out LGBT venues. I didn’t want to make a fuss or a scene but I really wanted to find the parts of the city that look and feel like me. Having tour groups and business target at LGBT tourists helps alleviate some of this awkwardness and gives people a place to seek out information.
Constance Taylor just finished a six month stint of long term travel. She said “When traveling I always feel it’s good to create some sort of comfort bubble from time to time. We always plan ways to get in touch with our LGBT community, whether it’s booking with an LGBT owned hostel or going out to an LGBT bar. It makes traveling to foreign countries not so foreign after all.”

Safety is still the number one concern for most LGBT travelers.

LGBT people want to see and do most of the same things as straight people but when we’re traveling there is this constant nagging perception that we will not be accepted or we could be in danger. Sometimes this perception is real and sometimes it’s based in fear and our previous lived experiences. Dani from Globetrotter Girls recently wrote about how frequently outting herself can lead to men eroticizing her. With instances of corrective rape being very real, these exchanges can quickly turn dangerous.
LGBT tourism is important because it helps build economies, educate communities and establish a means of comfort and safety in exploration. Investing in pink travel is an investment in International equality. If you are interested in learning ways to improve your LGBT marketing campaign or make your company more inclusive, contact me, I’d love to help.