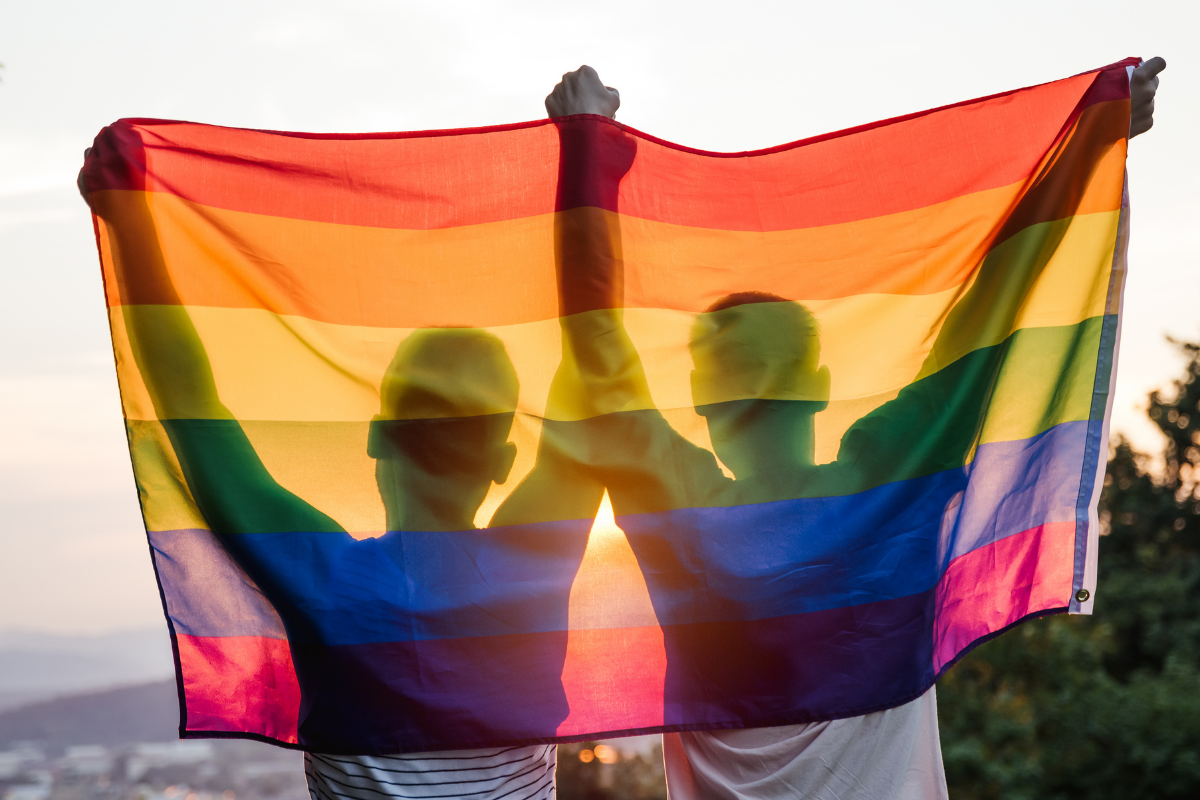 This past week I was in Madrid, Spain for my very first World Pride. I’ve attended Pride in a few dozen countries and at least twice as many cities at this point, but World Pride is a completely different ball game.

I was in town working with Spanish Tourism with 50 other journalists, bloggers, and influencers so I was balancing a schedule of work hard PLAY even harder. One of the coolest parts of what I do is being able to make friends in the industry and see them all around the world.

Our group was staying at H10 Villa de la Reina Boutique Hotel on the Gran Via, which is basically the main drag of Chueca – Madrid’s LGBT neighborhood. The location couldn’t have been better. It’s literally right at the heart of everything. The rooms were super cute, clean, and had everything you could possibly need after stumbling back to the hotel at 5 AM. Yup – that happened – and I wasn’t even drinking. Spanish parties just go super super late. We showed up for one party at LezbiQueer bar, Fulanita De Tal at around 12:30 at night and the staff was still hanging banners and setting up tables. She looked at us like we were dumb and said we should come back at 3 AM when the party started. THREE AM?!? Ya’ll – I’m a grandma. That’s when I left the bar back when I was 22. We rolled with it though and still ended up having a great time.

“World Pride Madrid was a celebration of progress but was also a very clear beacon of hope to LGBT folks around the world who may not be able to have a strong voice on LGBT equality in their home communities.”

Later this month, I’ll be posting my official Lesbian Travel Guide to Madrid, but I wanted to give you a little behind the scenes taste of our trip. Our days were filled with press conferences, museums, and guided neighborhood tours, aka me and Arielle posing for Instagram photos and snaps while the hard-hitting journalists hung on every word. We’re professional – promise.
Shameless plug: Follow me on Instagram for heavy filters, bad puns, and musings about my world travels.

Madrid is one of the top five cities for tourism in Europe. It was very clear that World Pride was a huge deal for them. 2.5 million people turned out to celebrate the LGBTQ community and it was so beautiful I cried when I got back to my hotel room. I’ve seen a lot of Prides but there’s something about seeing straight families with their babies in a crowd that really gives me hope for the direction of the world. According to Pew Research – [and the press conference I attended – see I take notes] – in 2012 a survey was conducted amongst Spanish people and 92% accepted LGBT people. Which is why Spain is the number one tourist destination in the world for our community.

World Pride Madrid was a celebration of progress but was also a very clear beacon of hope to LGBT folks around the world who may not be able to have a strong voice on LGBT equality in their home communities.

In the 1970’s Spain was controlled by Francisco Franco Bahamonde a general who ruled over Spain as a military dictator for 36 years. Dictatorships tend to be intense [so is camping – okay – I’ll stop] dictatorships – right… they tend to control freedoms and guess who got the short end of the stick – yup the queers. We got a guided tour of “Subversives. 40 years of LGBT activism in Spain” from three amazing Spanish LGBT activists, who walked us through the details of Spanish resistance.

One of the things I really enjoyed about World Pride was the attention to detail that the local government paid to the event. Things like gathering the community together to hand make a giant rainbow banner to display at City Hall or the city installing permanent inclusive traffic lights ahead of the event. Yes, literally new streetlights featuring LGBT couples holding hands. Or how they put rainbow stickers on all the city buses. The city was literally DECKED in rainbows at every turn. I wanted to ask just how many flags were used – but that didn’t seem like the hard hitting question a journalist would ask so I just mumbled it to my friend Bella from Diva Magazine who was sitting next to me at the press event.

Normally, when I’m home from a press event, the things that stay with me are the foods – [Ham, Tapas and red wine are a MUST in Madrid] – the tours [ like the guided tour of the exhibit  “Canon” by controversial artist Mateo Maté at Sala Alcalá 31] and the architecture [ I was drooling over the parks and side streets] BUTTT what is really staying with me this time around are the people I met.

A group of 50 people from around the world coming together for an event should be rocky – and it was a bit. We had in-depth political conversations over the future of the LGBT movement while eating tapas lunches and drinking high-quality wine. I challenged some of my colleagues on their political views and their content while still trying to learn from the roots of their pain. It was an incredible learning experience for me as a blogger, activist, and as a decent human. If I learned one thing from this incredible group, it’s that we have something to learn from everyone – even if you have major differences, we as humans are more the same than we are different. Siloing ourselves into groups according to our political beliefs is dangerous. The more we engage with those from other countries and other sides of the political aisle, the more we’re able to understand and empathize.

Before I get to the photos portion of this post, I want to thank Ana, our PR rep from Spanish Tourism because she paid such special attention to our needs and was so patient with us when we needed her to be.

Without further ado – I give you World Pride Madrid

Meg Ten Eyck is a queer gal with expensive dreams and a whole lot of hustle. Meg is extremely gay and entirely addicted to travel. Like, we're talking Pride Parade gay - if they made a Meg Barbie her one accessory would be her rainbow flag and a copy of the feminist manifesto - THAT kinda gay. You can find her traveling the world or through her writings and ramblings @MegTenEyck
PrevPreviousLesbian Travel Guide Washington DC
Next10 Questions to Consider When Planning Your LGBT HoneymoonNext