I was a witness to history unfolding itself in Riga this month. The third stop on my leg of the #MyGayPride tour with Two Bad Tourists and Gay Star News, Riga was the first post soviet country to host EuroPride.
EuroPride is a week long celebration of European LGBTs. Each year, the celebration is held in a different country around Europe. This year was very different than previous years because it was held 200 miles from Russian border days after massive violence erupted in the Ukraine pride festival.
Russia is well known for having strong anti-LGBT policies and has been reported by Human Rights Watch and Amnesty International for an increase in anti-LGBT violence. Having the march so close to the Russian boarder was pretty ballsy considering that Latvia is not exactly a bastion of LGBT rights either. The organizers started planning Riga’s Europride in 2012 because of the countries’ heavily conservative and christian roots.
The first pride in Riga was ten years ago. Previous pride marches have been met with violence, teargas and bags of human feces thrown into the crowd.
Local authorities were not exactly on board with the events. The Vice Mayor, Andris Ameriks said to the Baltic Times, EuroPride “is a pretentious demonstration of oneself, which does not promote understanding.”
Parade went smoothly despite a heavy police, anti-LGBT protestor presence and ugly commentary from non-supporters. Activists have hailed it as a wild success because the event went on without any violence and attracted a crowd of 5000 up from 800 last year. 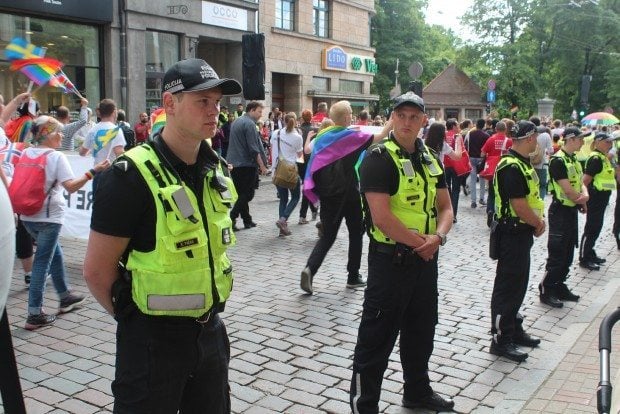 Activists had anticipated 2000 people for the 2.2 kilometer march which is 4 times larger than any previous pride celebration in Riga.
There were 3 protestors arrested for disturbing the peace and Gay Star News reported witnesses saying protesters burnt the rainbow flag while spouting their usual vile rhetoric but in all the event was met with very little ugliness when compared to other events around the world this year.
The attendance of EU and international officials put pressure on the local government to ensure the safety of the attendees. A heavily publicized series of international human rights violations would not be a good look from EU heavy weights that are more LGBT friendly.
In the end, the series of workshops, performances and a march through town were a welcome reminder of the changes the world is facing.
Special thank you to Two Bad Tourists, Mercure Hotel and Air Baltic for sponsoring my trip. Photos by Adam Groffman of Travels of Adam.
Tweet
Share18
Pin
18 Shares