Chicken Parm and Broccoli Pasta: A Recipe Spiced with Memories

Bella here and I’m going to show you how to make Chicken Parmigiana and Pasta with Broccoli. But, before we get to the tasty stuff, I’d like to tell you a tale about Little Bella growing up in Queens, NY.
So, grab a nice glass of Carlo Rossi, the perfect pairing for this meal and Come, Sit Down With Us!
My parents both immigrated to the USofA from their native countries in their early teenage years. My dad is from Athens, Greece and Mom is from Borgetto, Sicily. They met, married, had my brother, and then had me. They stopped after me because they figured they’d hit perfection, so why try?
My entire upbringing and current life revolves around food and wine. No matter the occasion, from celebratory parties, to funerals, to “Hey Ma, I gotta talk to ya about somethin. Pour the vino.”
Recipes are passed down traditions and a vital part of my life. Everything was always cooked from scratch. While most babies had milk in their bottles; I had pastina con formaggio (pasta with cheese).
Learning how to cook wasn’t taught to help in career choices, but something you learned as a common skill. You learn how to walk, you learn how to cook. Simple.
My paternal grandparents only spoke Greek and my maternal grandparents only spoke Sicilian. Both my mom and dad learned English after a few years of living in America.
Many of my cousins married people of different nationalities whose immediate families were immigrants as well.
You get the idea, right?
Family gatherings were a hoot! And not for the faint of heart. But, you just pour the Carlo Rossi, also known as “Nonno’s Vino” (grandpa’s wine), serve the pasta, and laughter was about the only thing you’d hear other than the music!
Later in life I met Tamara (the other half of “Come, Sit With Us”) and my life was complete. We both share an incredible passion for food, wine, and culture. The only thing that tops my love for food, is my love for her. 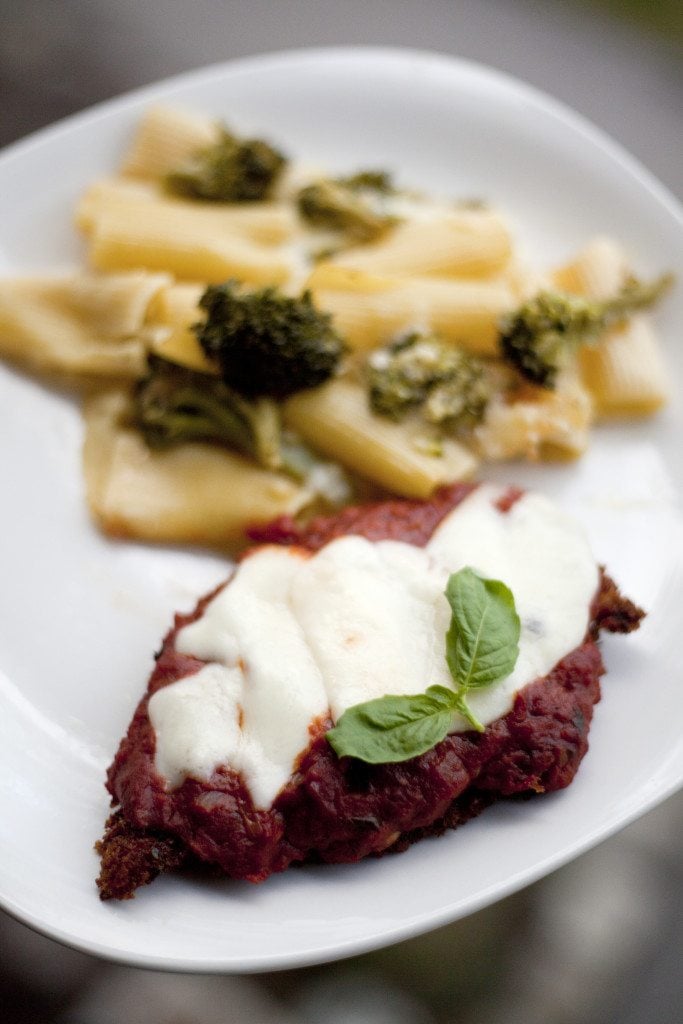 I wanted to share this meal and wine with you because it holds such priceless memories for me.
My nonno (grandfather) grew up a very poor man in Sicily and was in charge of caring for his mother and his siblings. His father passed at a very young age and as such, the role of caretaker fell to my nonno.
He strived for nothing but the best for his family growing up and later the family he had. Even if it wasn’t the best there was, it was what he could afford, and he MADE it the best.
All of my memories of Sunday dinners at my nonno’s house consisted of Carlo Rossi and A LOT of food and family.
Although he is no longer with us, that wine is still served on Sunday dinners as a tribute to him. It will forever remind me of my nonno.
So, why did I choose Chicken Parmigiana (THE most cliché Italian dish ever!) and Pasta with Broccoli?
Sauce or ‘sarsa’ as we would call it, was the first thing I learned how to make. It’s a simple recipe, but it’s the love attached to it that makes it taste so wonder-licious!
When I was just a tiny little thing barely able to see over the counter, my mom, my nonna (grandmother), and I would sit and talk about random things. We drank our wine (yeah, it was normal for little kids to have a very small amount of vino), played wonderful music, and made this sauce.
Chicken Cutlets or ‘cotolette’ was the standard go-to for my mom to make in a quick fix. Also, what pairs better with awesome sauce then chicken and some muzzy?
Pasta with Broccoli holds strong memories of my mother for me. She is the fire behind my passion for food. My mom is an incredibly hard working, strong woman who is a true inspiration to me. And to this day the smell of garlic takes me back to little Bella, sitting at the table, doing her homework, as Ma made dinner.
So, give yourself a treat and try this meal, Ya Welcome! 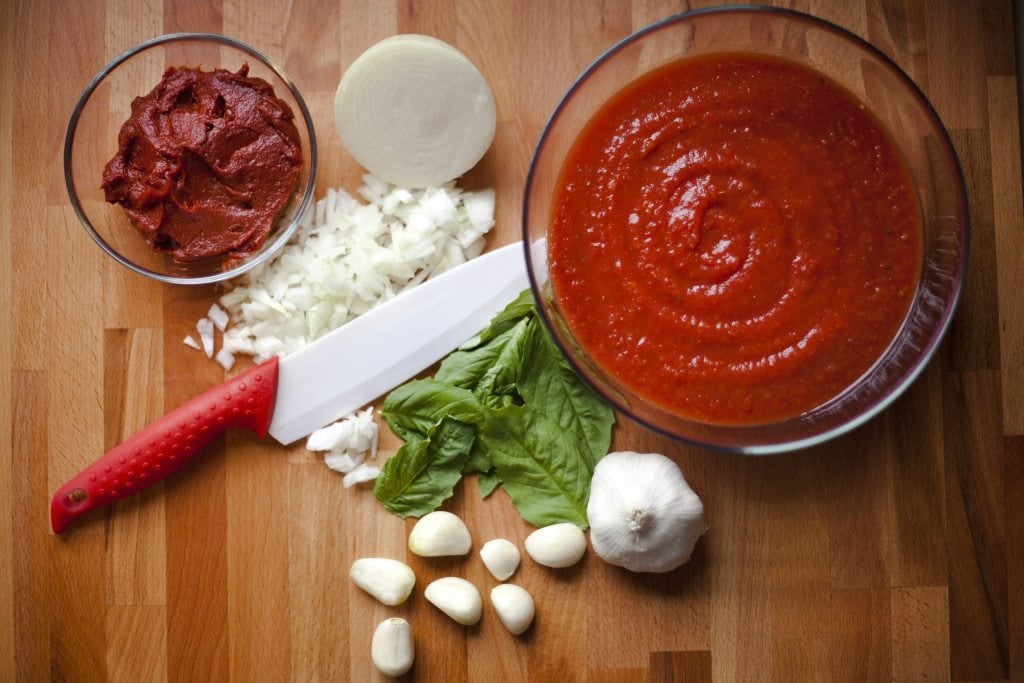 o   Take a big pot and put the EVOO in
o   Throw in the onions
o   Cook on medium heat for about 5-8 minutes or until translucent
o   Toss in the garlic
o   Cook for another 5 minutes
o   Scoop out the tomato paste and stir it around to gather the onion and garlic. Cook for another 2 or 3 minutes. Stir frequently.
o   Put the can of Crushed Tomatoes in and stir to evenly distribute the paste.
o   Bring the heat up to medium-high and put a lid on it
o   Once it starts to boil, stir, then put the lid back on, and put it down to a medium low to simmer.
o   Stir occasionally (let them get to know each other a little bit!)
o   After about 25-30 minutes, taste it. If it taste’s bitter, cook for another 10-15 minutes, if it’s not bitter throw in some salt and pepper. Season it to your liking. (you can even use red pepper flakes if you want to kick it up some)
o   Toss in about three tablespoons of sugar, this helps bring out the underlying flavors. If you want your sauce a little sweeter, put some more in there!
o   Break up the basil with your hands and throw it in. Stir.
o   Let it sit with the lid on for about 10 more minutes 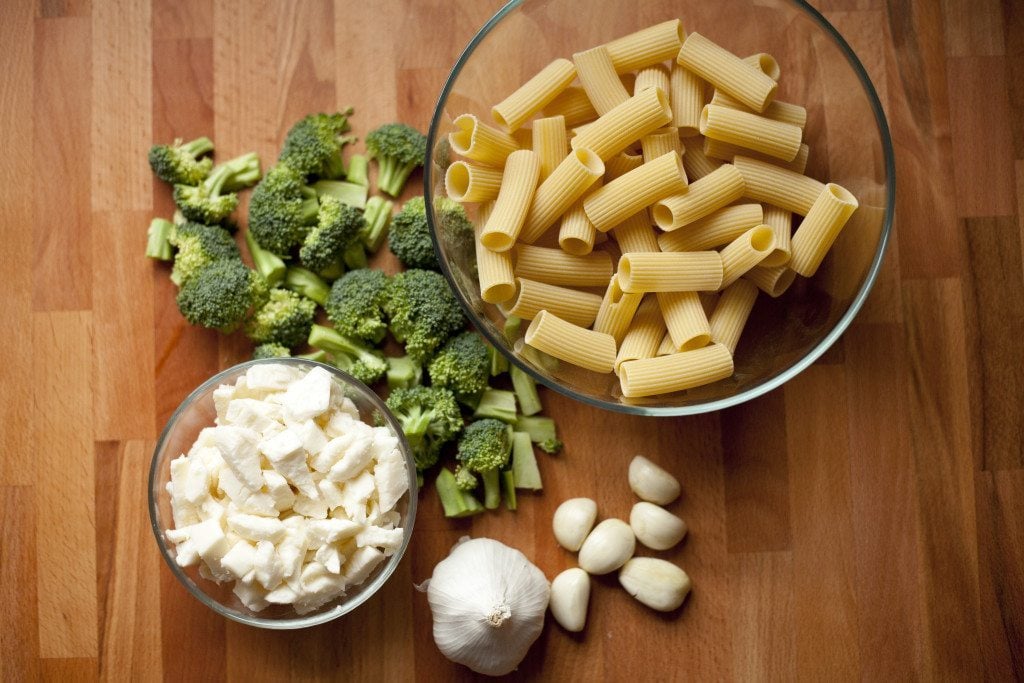 o   Start the oven at 400 degrees.
o   Take a pot out and fill it with water. Put a little salt in the water for taste and bring it to a boil.
o   When the water in the pot is boiling, put the pasta in, and stir occasionally. Cook to your liking.
o   Put the chopped broccoli in another pan with about ¼ cup of water and steam it. *When it gets bright green it’s ready!*
o   Toss in the garlic and about 2 tablespoons of the EVOO. Stir to evenly distribute. Cook at medium heat for about 5-8 minutes then put it in a bowl.
o   When the pasta is cooked, put it in a casserole dish and coat it with the rest of the EVOO (or butter). Then put the broccoli with it.
o   Put the mozzarella cheese in the casserole dish with the pasta and broccoli and mix it around. Use your hands (that’s where the love comes in).
o   Cover it with aluminum foil and put it in the oven for about 15 minutes. 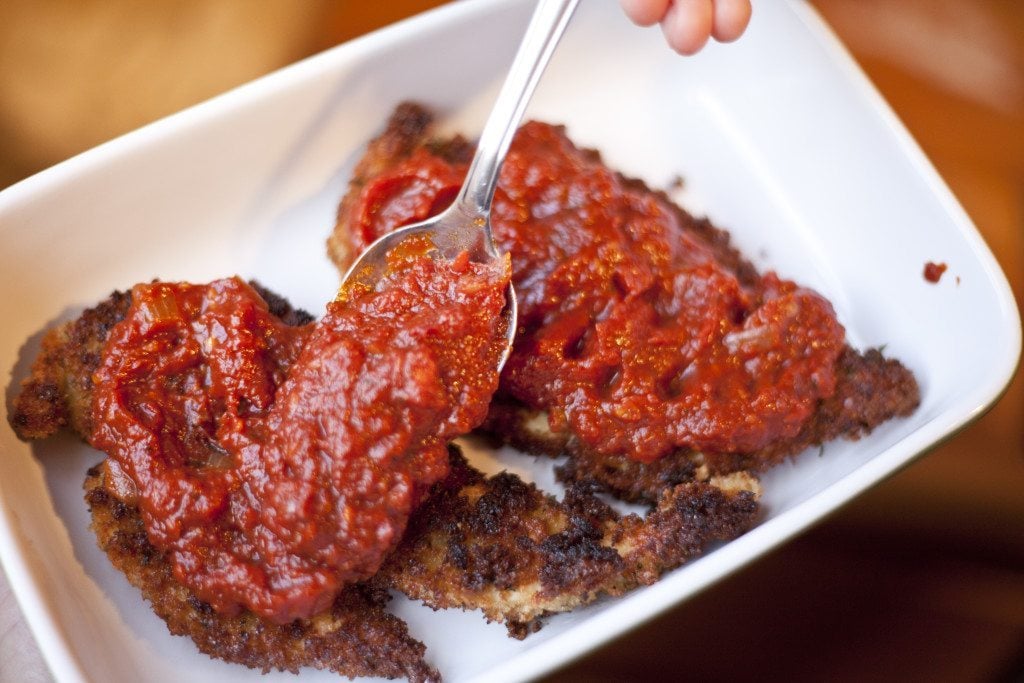 o   Start the oven at  450 degrees
o   Get a medium sized pan and coat the bottom with vegetable oil. Set to medium-low heat
o   Break the eggs into a wide bowl and beat
o   Pour the bread crumbs into a separate bowl
o   Coat the chicken cutlets in the egg, and then in the bread crumbs until both sides are well covered in bread crumbs
o   Put the breaded cutlets into the pan and cook for about 5-7 minutes on each side. Then set aside on a baking sheet
o   Once all the cutlets are cooked, spoon your sauce on top of the cutlets (Put as much or as little as you want!)
o   Add the sliced mozzarella on top of the sauce (Again, as much or as little as you like)
o   Bake it in the oven until you see the mozzarella melted to your liking

Now look, this isn’t science, it’s an art. So here are a few tips:

– Make it to your liking. If it’s not exact precise measurements it’s going to be Ok!
– Improvise to fit your individual needs.
– Drink wine and play music to set a relaxed and stress-free atmosphere.
– And remember, if you’re not having fun, you’re doing it wrong!