Berlin is the queer capital of Europe. It reminds me a bit of Brooklyn. I even tweeted that NYC had some competition when I was in Berlin.

There isn’t one “Gayborhood” because queer culture has spread throughout the city. I was in town during my #MyGayPride tour and got to explore the Lesbish-Schwules StraBenfest (lesbigay street festival) with 350,000 of my closest friends. It was an outdoor street fair with tons of food, bars and vendors. It’s the street fair that leads up to Berlin’s Christopher Street Day. CSD is the German name for Pride which is one part celebration and one part demonstration because Germany still does not recognize some LGBT human rights.
While I was in town I had the opportunity to work with Visit Berlin where they hooked me up with a massive amount of information about what to do and see while I was in town. They also have a brand new hotel collaboration that I think is pretty cool. It’s called the Pink Pillow Collection. It’s a group of LGBT-friendly and affirming hotels that advertise together. Hotels participating have to sign a document that states they will treat all guests and employees with respect, dignity, and courtesy. Sounds pretty basic right? They go further, all participating hotels must participate in social projects, provide LGBT affirming information and participate in Visit Berlin’s LGBT information days.
Obviously, this isn’t hard and fast proof that every individual working in one of these hotels is LGBT-affirming and supportive. However, it’s a great place to start. It’s much better than some hotel search sites that give hotels the option to click a box that says LGBT affirming without any evidence to support their claims. Unfortunately, LGBT travelers are big business and some places will try to capitalize on the pink dollar without supporting the community.


While I was in Berlin I stayed at a Pink Pillow Hotel called The Weinmeister in the hip streets of Mitte. Both the hotel and the neighborhood were polished, trendy and super queer friendly.
The Weinmeister is like Instagram had a baby with an upscale boutique hotel. The door and staircase are covered with beautiful murals from local artists like Jana Hammermann. The art inside the Weinmeister was created by The Paint Club, a collective of Berlin-based international artists. 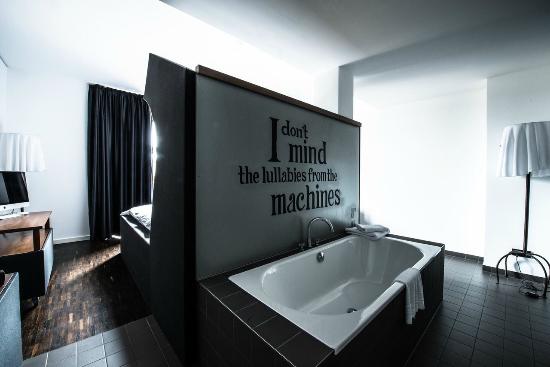 My room was incredible. It was complete with a king sized bed and a full-size bathtub. The room was decorated with several nods to the German band, Hurts and complete with tasteful memorabilia. 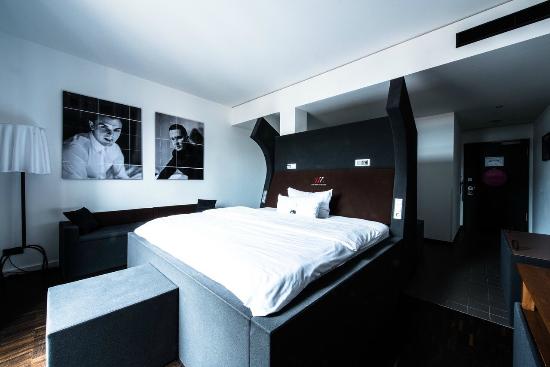 The hotel itself has a wide range of luxury amenities that you can read about on their website. Everything from spa services to bar packages. The one amenity that really can’t be missed is the rooftop terrace. They have gorgeous views of the Berlin skyline, a hot tub, and a bar. I mean, they had me at vodka. 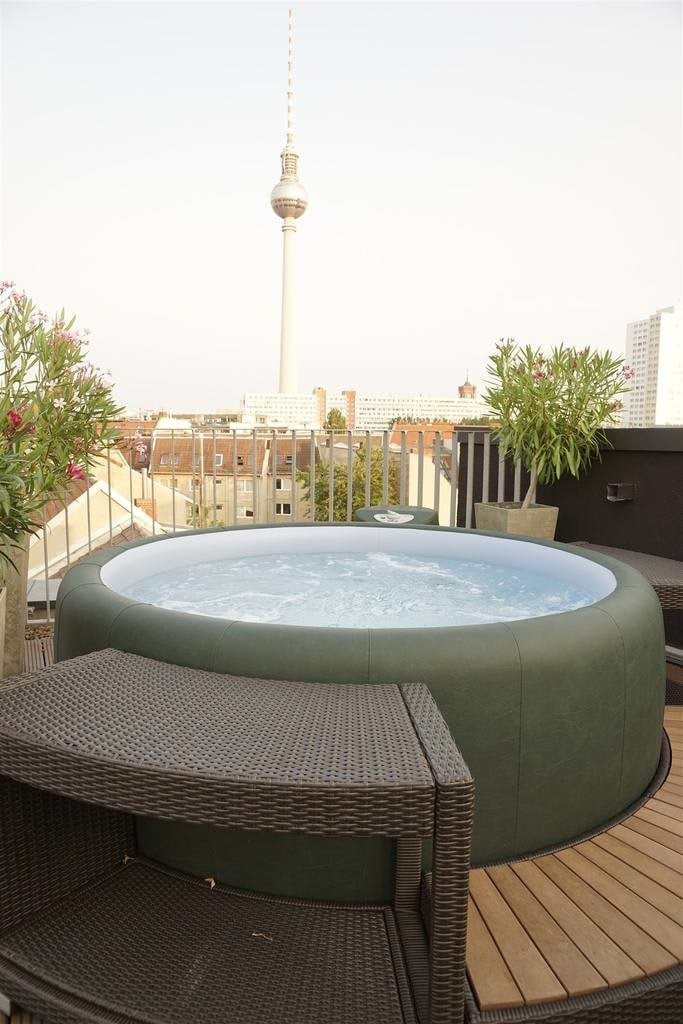 Speaking of which, I really enjoyed the lobby bar too.  Schwarz-Bar is the center of the lobby. They have giant high backed armchairs set up around tables with a full-service bar and a self-service bar. I thought the self-service bar was interesting because it was based on honesty. A novel concept that I wish more business would support. I found the German idea of rules to be rather interesting. In numerous situations, I found that German people held steadfast to rules for any given public engagement. The sign says pay for the beer, okay great. I’ll put my money right here. In America, everyone and their mother would be thinking about ways to game the system to their benefit. Not in Berlin, people punch their metro cards, pay their fares and walk on the correct side of the train platform. In my very limited experience, it seemed like Berlin is a city of rule followers. Which is a complete change of pace from my experience in NYC where “Do Not Cross” signs are seen as option and rules are generally seen as guidelines.
Visit Berlin also hooked me up with a Berlin WelcomeCard so that I’d have free use of public transportation and discounted or free admission to a ton of tourist attractions. I used it to visit the Schwules Museum. It’s an LGBT history museum. They are currently displaying “Homosexuality_ies” an extremely in-depth look at the history, politics and culture of homosexuality in the western world. I learned about the origins of Schoneberg aka Berlin’s “Rainbow Village” and how it was home to Christopher Isherwood. His novel became the framework for the musical Cabaret. I also learned about the neighborhood of Kreuzberg and how it came to be known as young, queer, and focused on counter culture. My inner history nerd slash fangirl was freaking out. It’s definitely not for everyone, but I really enjoyed my afternoon wandering around.
The most touristy thing I did while I was in Berlin was visiting the East Side Gallery. The gallery is the world’s largest open-air art gallery and also the largest remaining chunk of the Berlin Wall. I thought it was important to get a look at the art that freezes history in its tracks. As I spent the day pondering the historical side of Berlin in the misty rain, I wandered the the remains of the wall eager to bring their messages back to you guys. 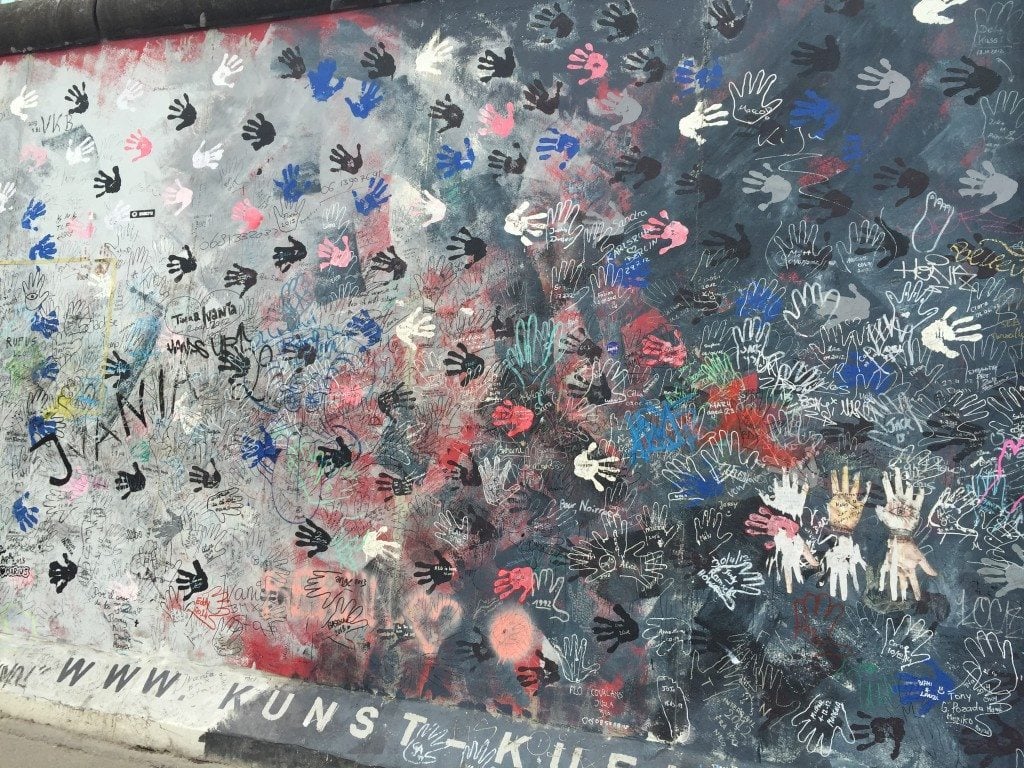 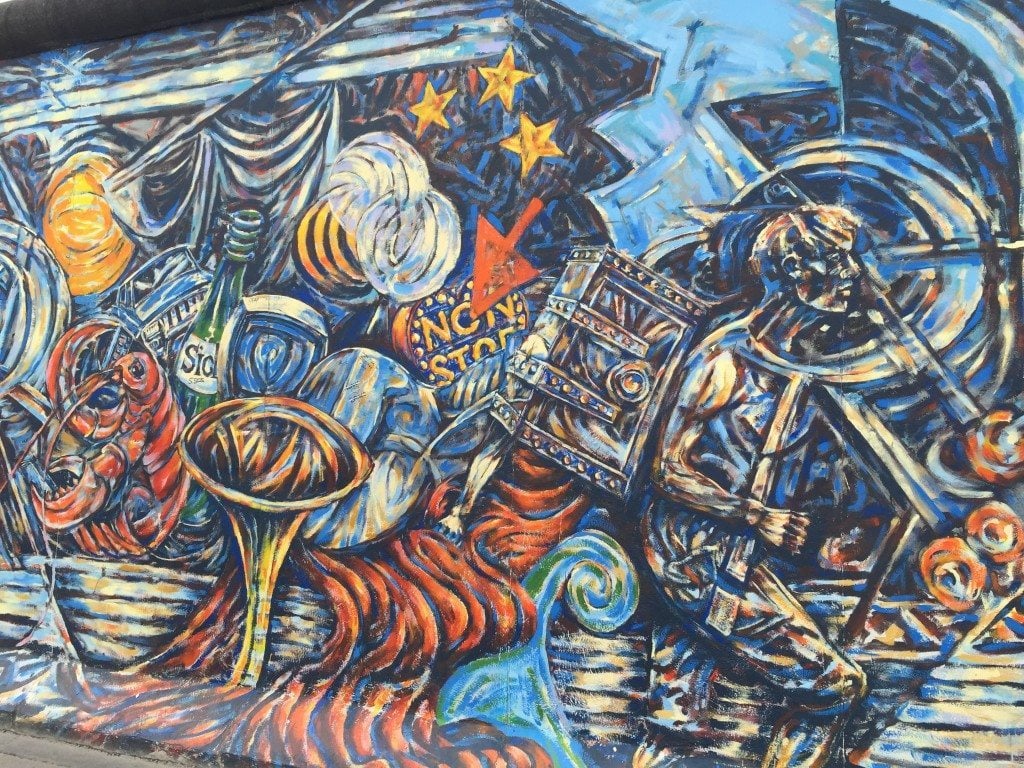 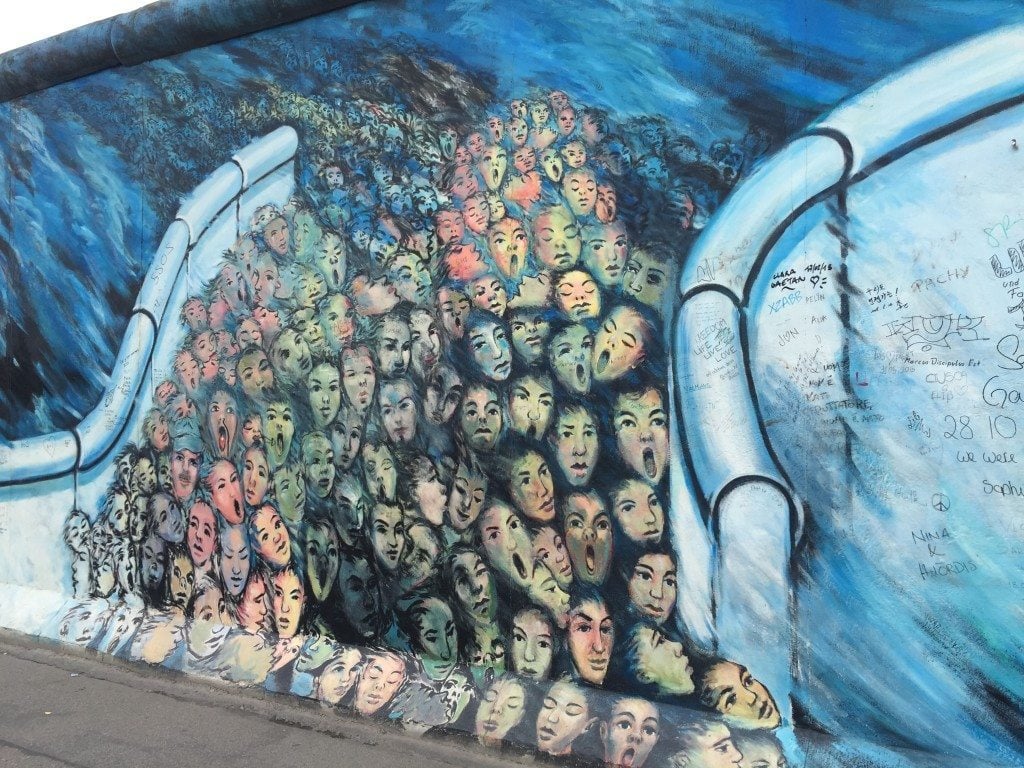 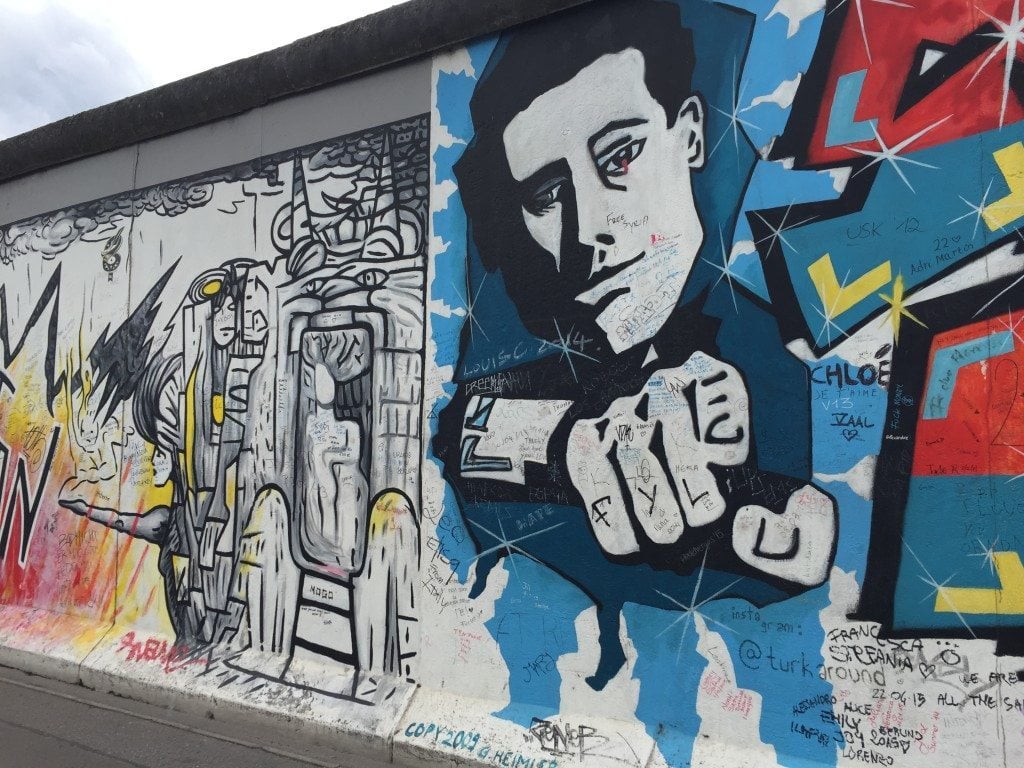 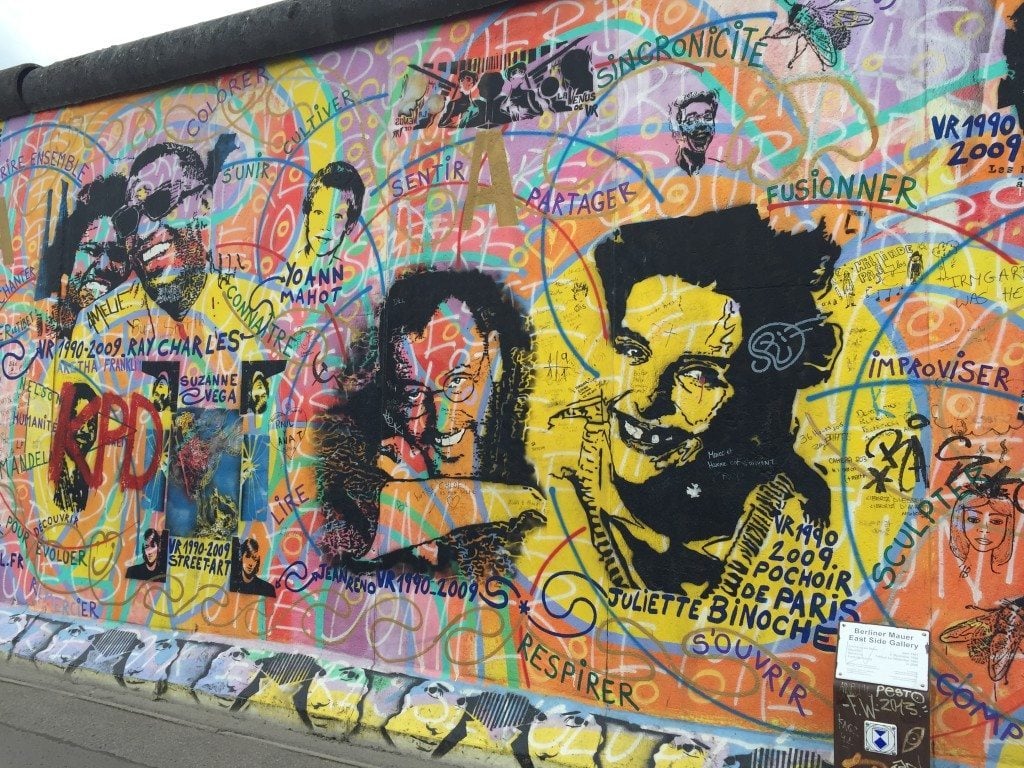 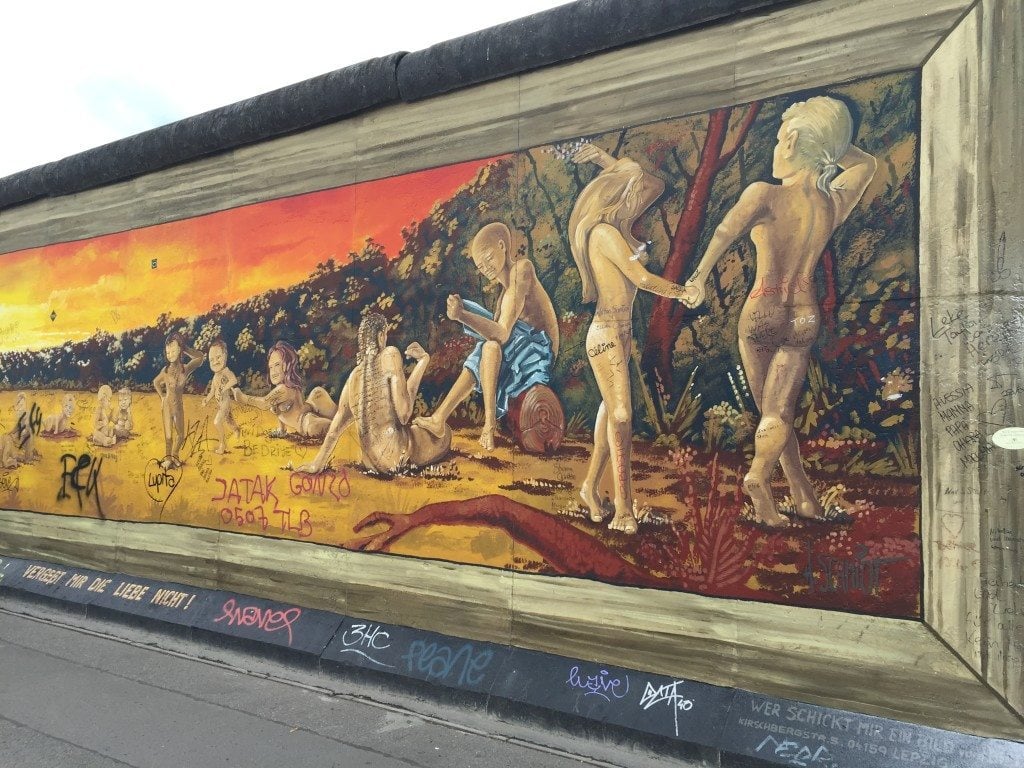 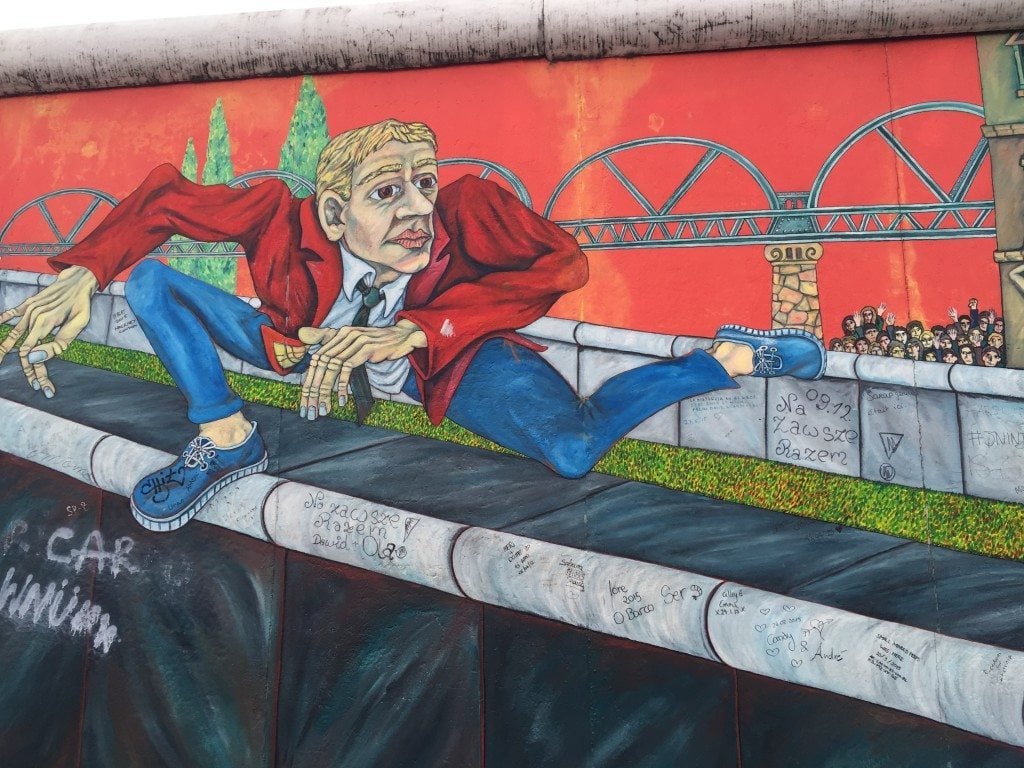 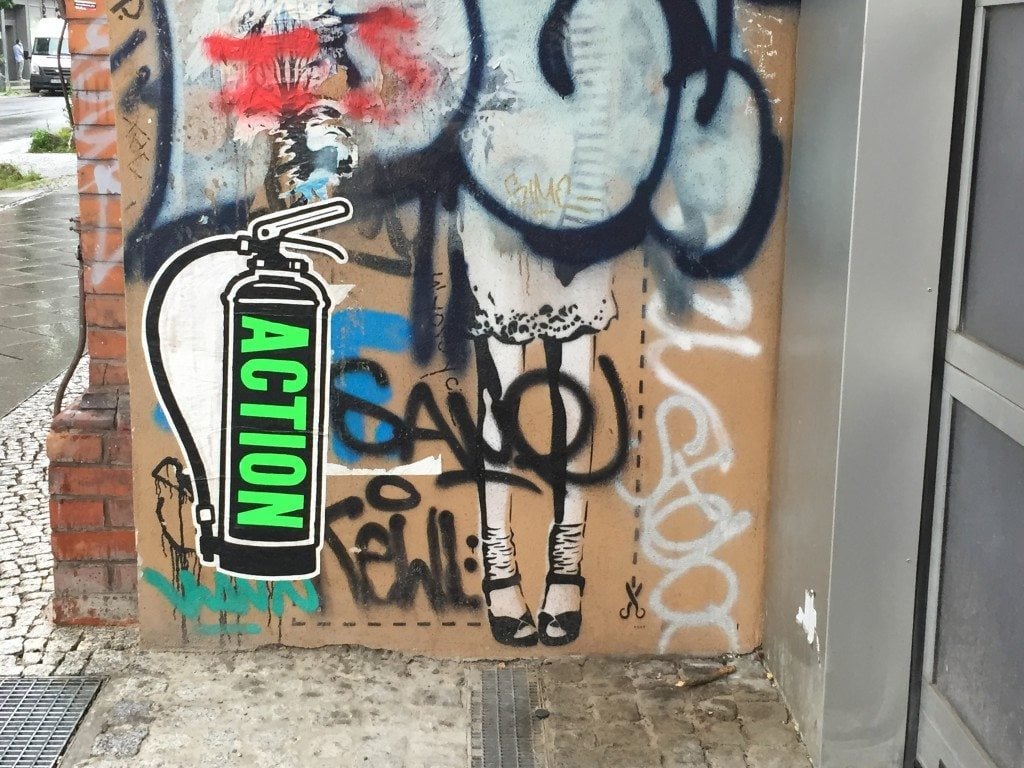 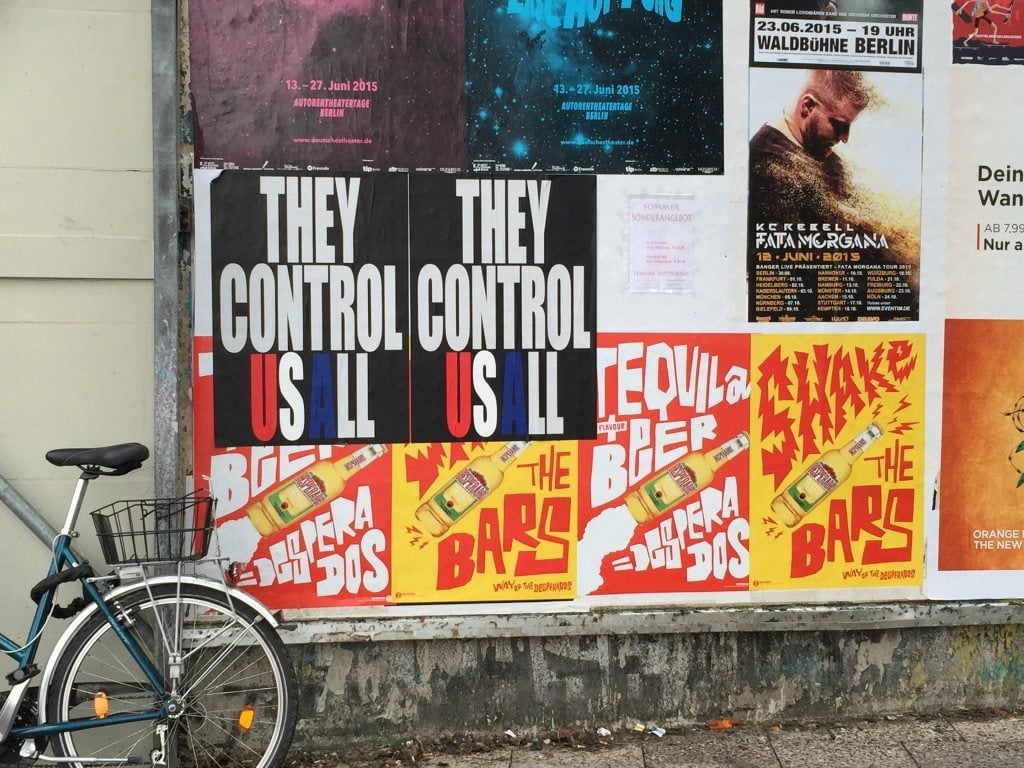 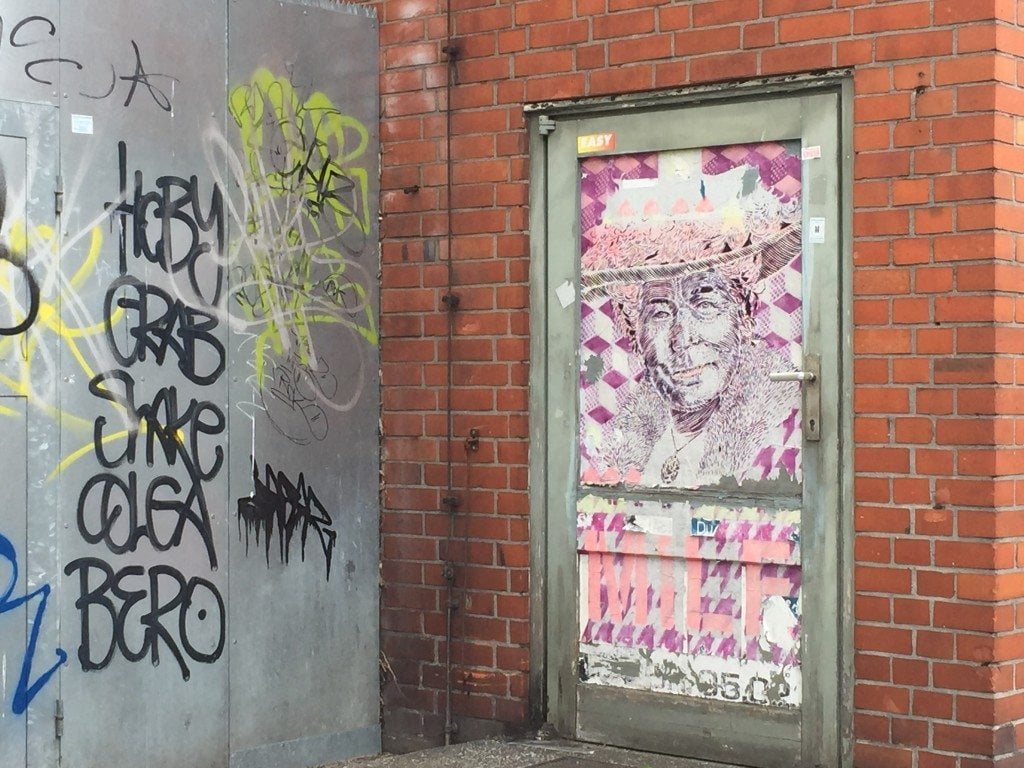 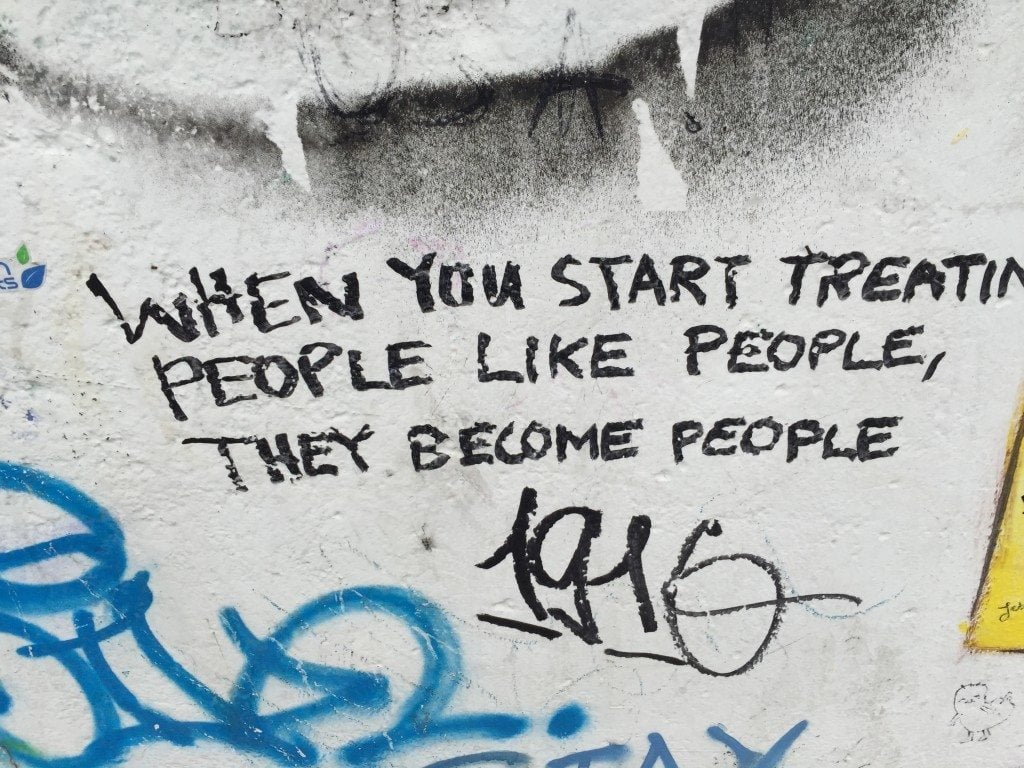 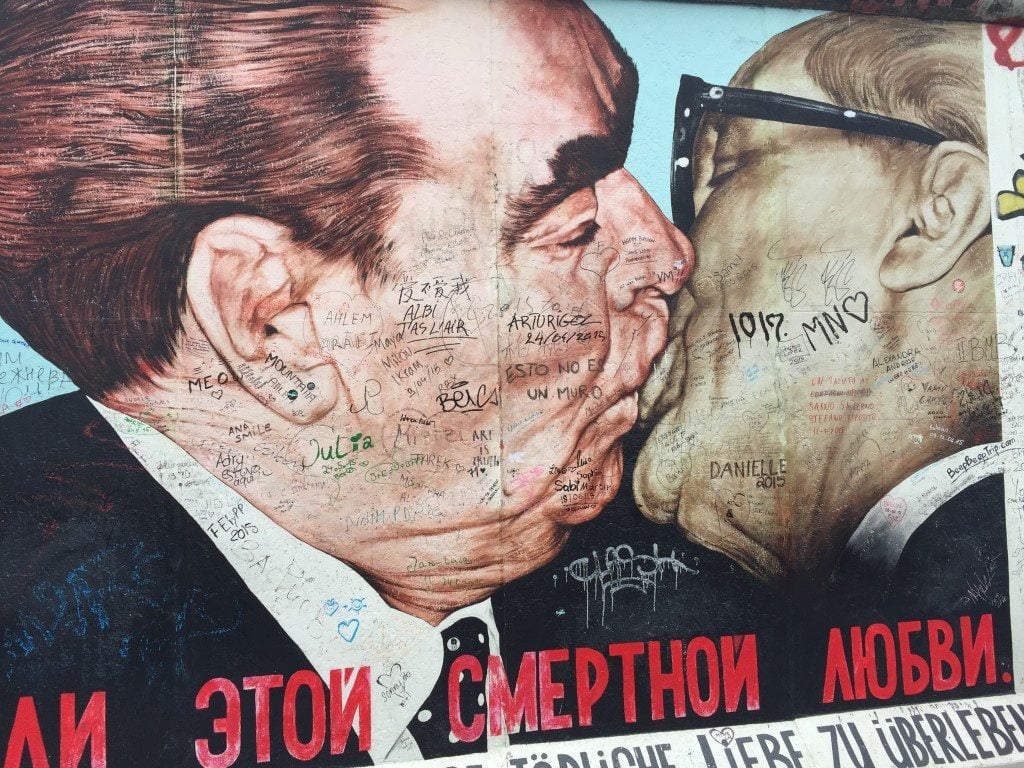 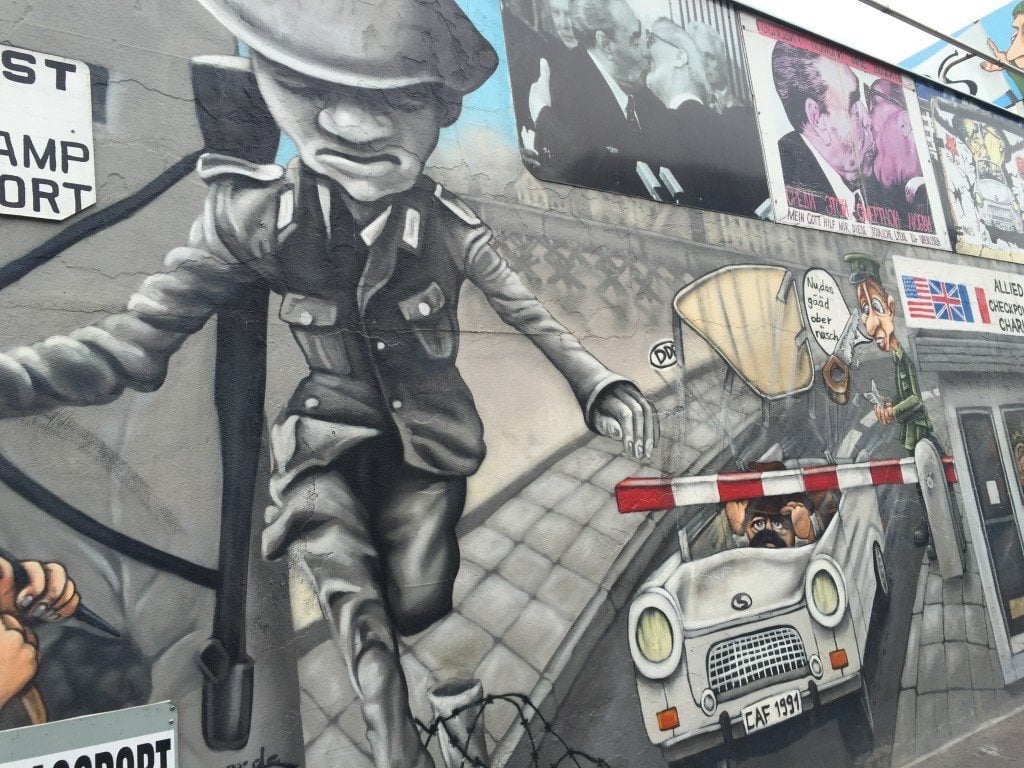 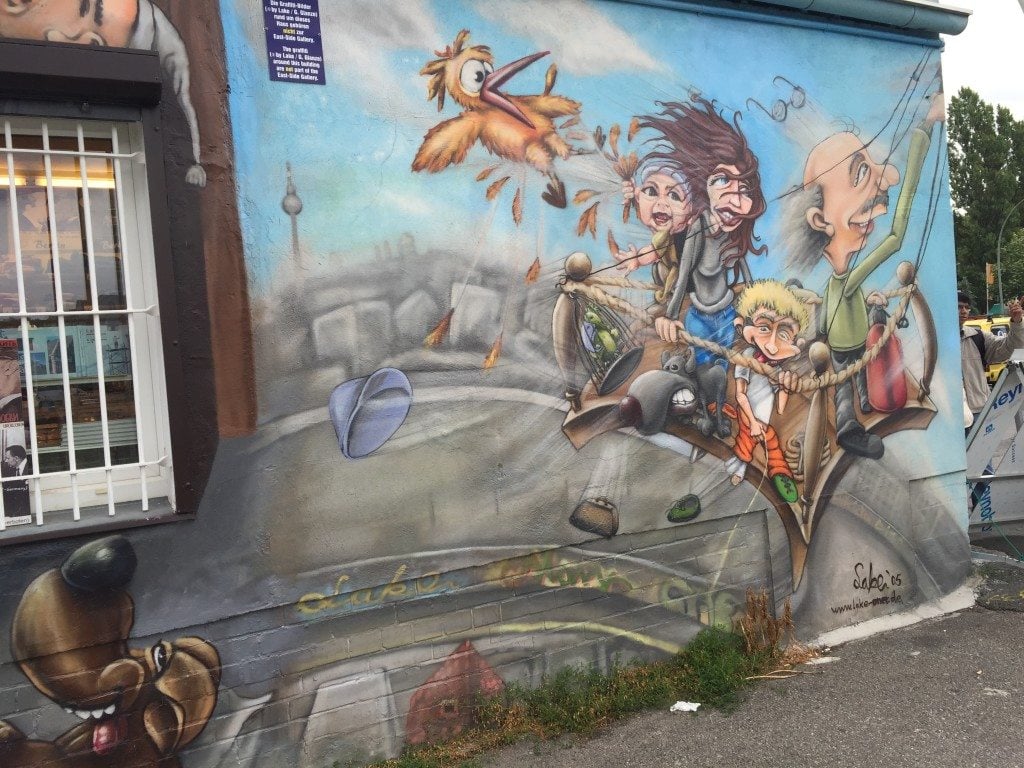 Where is the best street art in the world? Let me know in the comments below!

Queers You Should Know: Down Syndrome Advocate, Jaime Harman