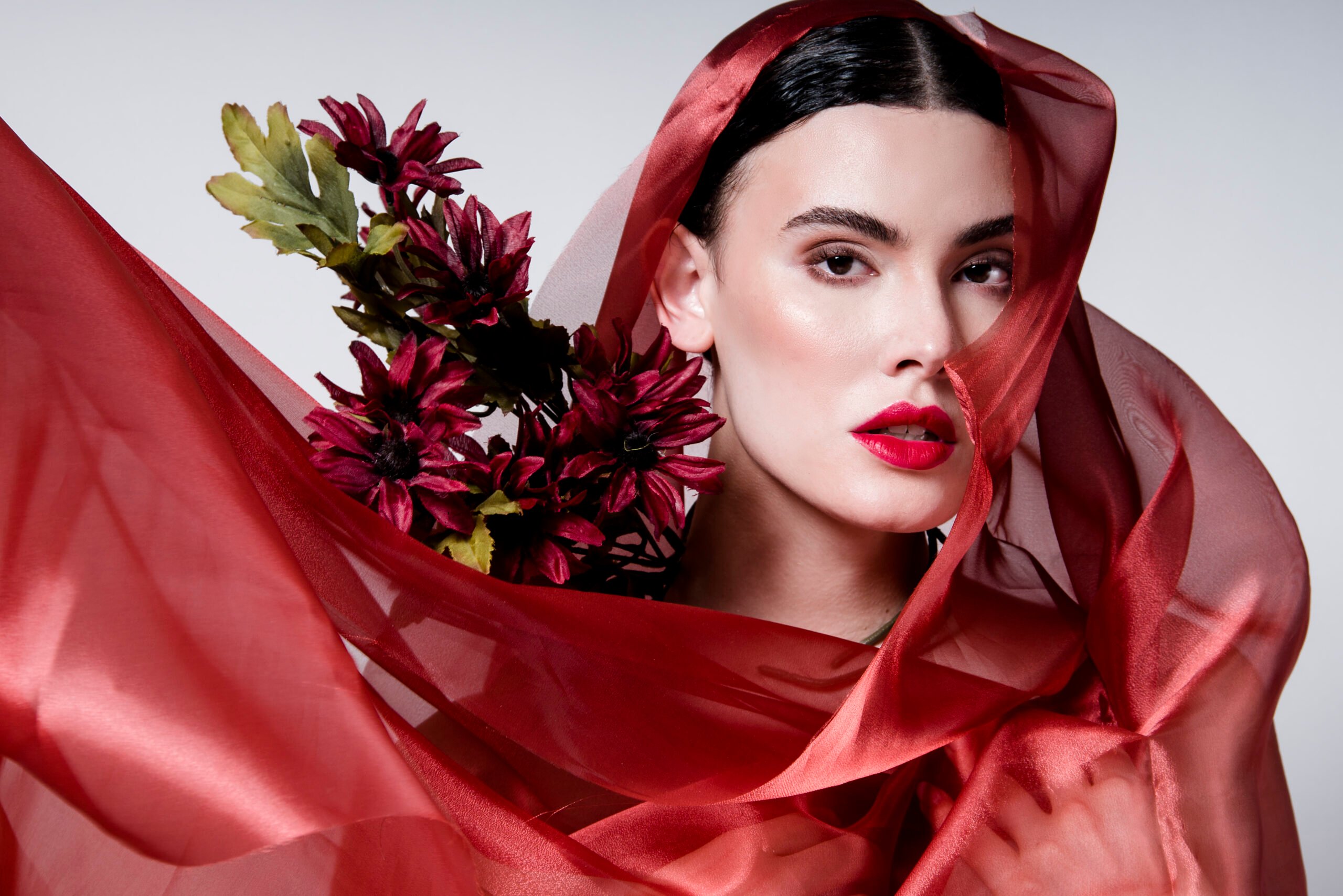 Visiting London has been a long time dream of mine. When I was a kid, I was a bit obsessed with the Geri Halliwell. To this day, I believe she might have been my first crush. My… my… how some things change. I watched Spice World on VHS so many times that the tape frayed and I actually cried. CRIED. I was in high school… anywhoo that’s not embarrassing.
My childhood was actually filled with tons of London centric stories. Peter Pan was always my favorite book growing up. So much so that I considered getting a tattoo that said “second star to the right & straight on till morning.” That’s how Tink describes the directions to Never Never Land.
I was also a huge Harry Potter fan. My sister and I went to the midnight release of each of the books. I may or may not have worn a costume to some of these… Jeesh with these confessions today.
So growing up I had this weird magical image of what London would be like, and ya know… I wasn’t altogether wrong. I had 48 hours in London to get a quick taste before I headed to Riga for EuroPride. Obviously, I jumped at the chance to see the city of my childhood dreams. 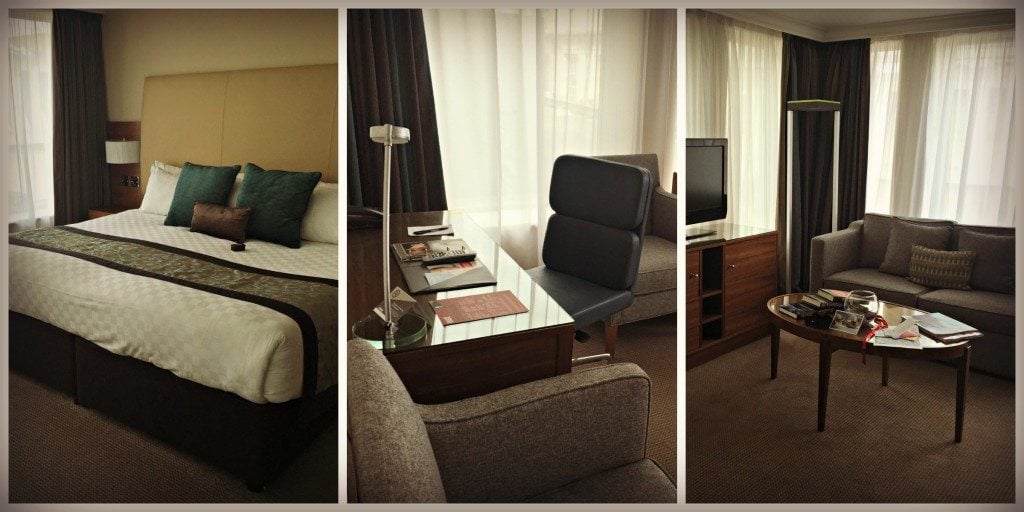 When I arrived at The Royal Trafalgar’s Thistle Hotel, I wasn’t sure what to expect. I had never stayed in a Royal Trafalgar Hotel before. The building itself is a 60’s style, all concrete square. The first impression left a bit to be desired, but when I walked inside my feelings completely changed.
First, I was personally greeted and immediately upgraded to a junior suite. That’s always a good way to start a trip. Then I noticed the beautifully wrapped box of chocolates and hand written note from the hotel’s management. Along side a selection of publications regarding London in an effort to help me with my research for writing this article. It was a really nice and personal touch that went above and beyond the usual niceties.
The room itself was incredible. It has a HUGE king size bed. All for little old me. It also had a lovely couch seating area with a large TV and full size desk. Honestly, this suite was bigger than my entire apartment back in New York City.
The Thistle Trafalgar sits between the National Gallery and Leicester Square, two very important locations in London. It’s within walking distance to Buckingham Palace, Soho, Regent Street, Oxford Street, Covent Garden, and the West End to name a few. It’s also located on a quiet side street that has little to no noise because there is no ongoing street traffic. Even with the construction and being in a busy neighborhood, I had no problem sleeping and couldn’t hear a peep out my 3rd floor window. 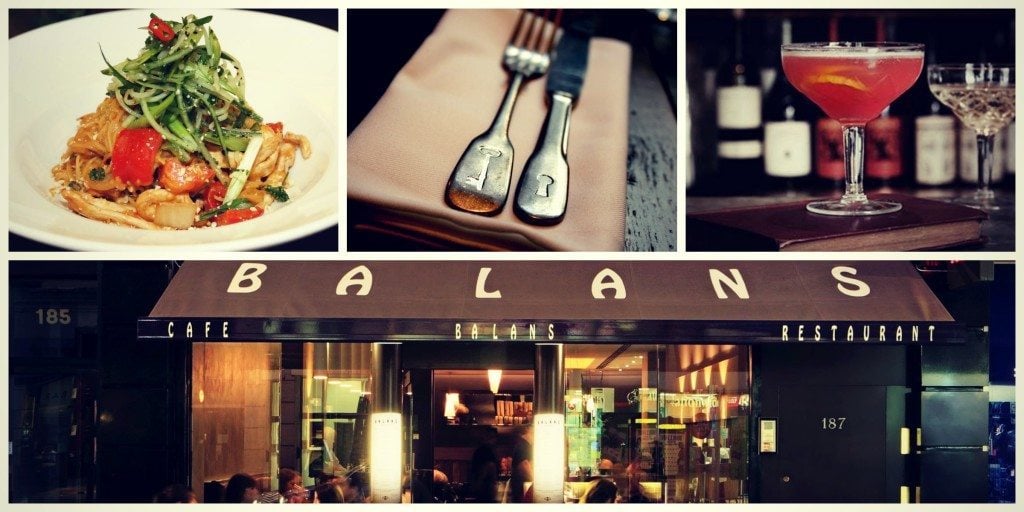 The first night I was in town, I got to hangout with some friends and have a night on the town. We went to Soho to have a drink at this adorable little downstairs bar called “Freud’s Cafe”. It’s down a set of stairs hidden in plain sight. We chatted and caught up before going to see Memphis in London’s West End Theater District.
After the show, we hit the town for some cocktails. Obviously, they had to show me around London’s trendy gay district, Soho. It was a Wednesday night, so things were a bit quite, but we still had an excellent time.
We grabbed dinner at Balans Soho Society. An adorable little open air cafe. I had the Herbed Chicken Breast with Rosemary Potatoes. It was perfect. Oh and I might have enjoyed a cocktail or ten over the course of the night. Try the Peach Belini it was incredibly tasty.
PRO TIP: The two popular lesbian bars in London are SHE Bar and MUSE. I spent more time at MUSE. It was a quiet little downstairs bar with decent drinks and friendly servers. Honestly, I was there at 10pm on Wednesday night so I can’t give the most amazing first hand review. My friend who I was with that evening is a local and said she really enjoyed it on the weekends. They’re having a huge pre-pride party on Friday June 26th to kick off the festivities. 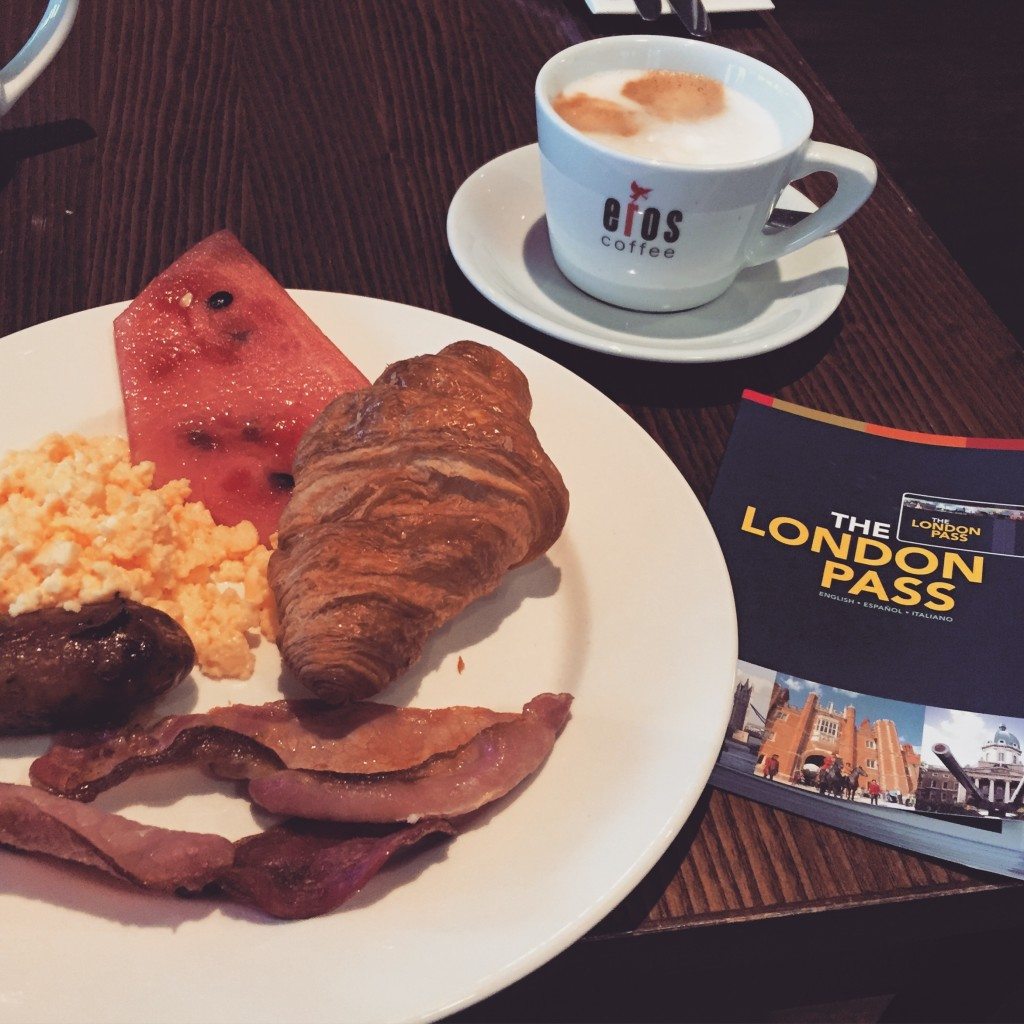 The next day, I used my London Pass to go site seeing. The London Pass it actually a pretty amazing deal. It gets you into a ton of attractions for little or no cost. It also comes with a oyster card (to use on public transportation) and lets you cut the line so you don’t have to wait forever. I used it to see some of London’s most iconic sites.
I visited Westminster Abbey & took an audio tour of the tombs. It was really surreal and kind of cool to see and learn about the history I’ve seen in books and movies my whole life. I think Tutor history is crazy interesting, so I spent quite a bit of time exploring. Unfortunately, photography is not allowed inside the Abbey, but I was able to get some pictures of the grounds and other areas. Using the London Pass got me into the Abbey for free. I also got to do a self guided audio tour as I walked around the grounds. It’s basically a walkie talkie that you hold to your ear as you make your way to different sites. Each spot is numbered. You push the correlating number on the walkie talkie and listen to the speaker explain what you’re looking at. I really enjoyed learning the back story to each part of the tour. 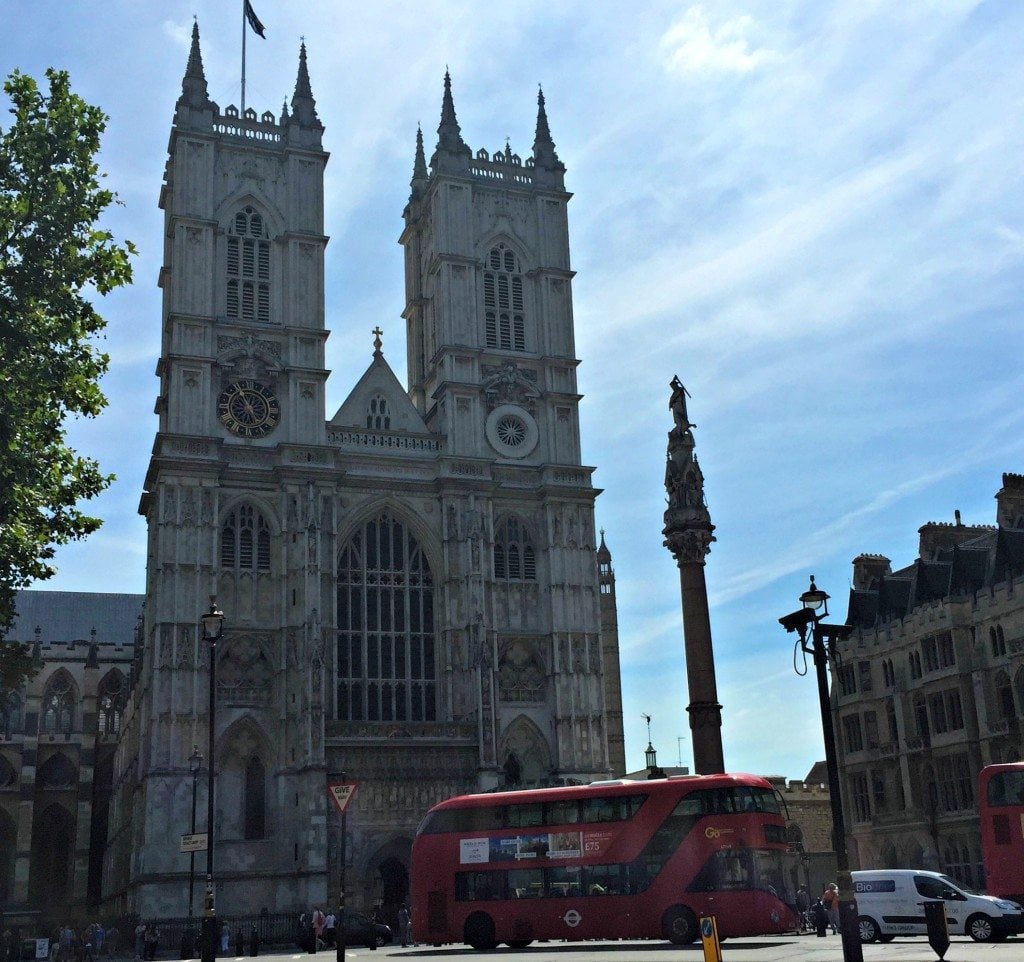 After Westminster, I headed around the corner to a Thames River boat cruise and passed by some of London’s most iconic landmarks. We headed towards the Tower of London as we passed The London Eye, Shakespeare’s Globe Theater & The Tower Bridge. The cruise was free with my London Pass and took me straight to the dock where the Tower of London is located.
If you’re a huge history nerd (cough** like me) you’ll love the Tower of London. It’s actually more like a giant complex of historical buildings. I did an audio tour here as well. I got my little walkie talkie and learned all about the grisly history of the Tower. If you’re into weird morbid shit (who isn’t?) the Tower has some great stuff. Two saints and three queens are buried there. They have an entire building dedicated to medieval armor and weapons. PLUS they have a really cool exhibit that has the original graffiti of some of England’s most famous prisoners. 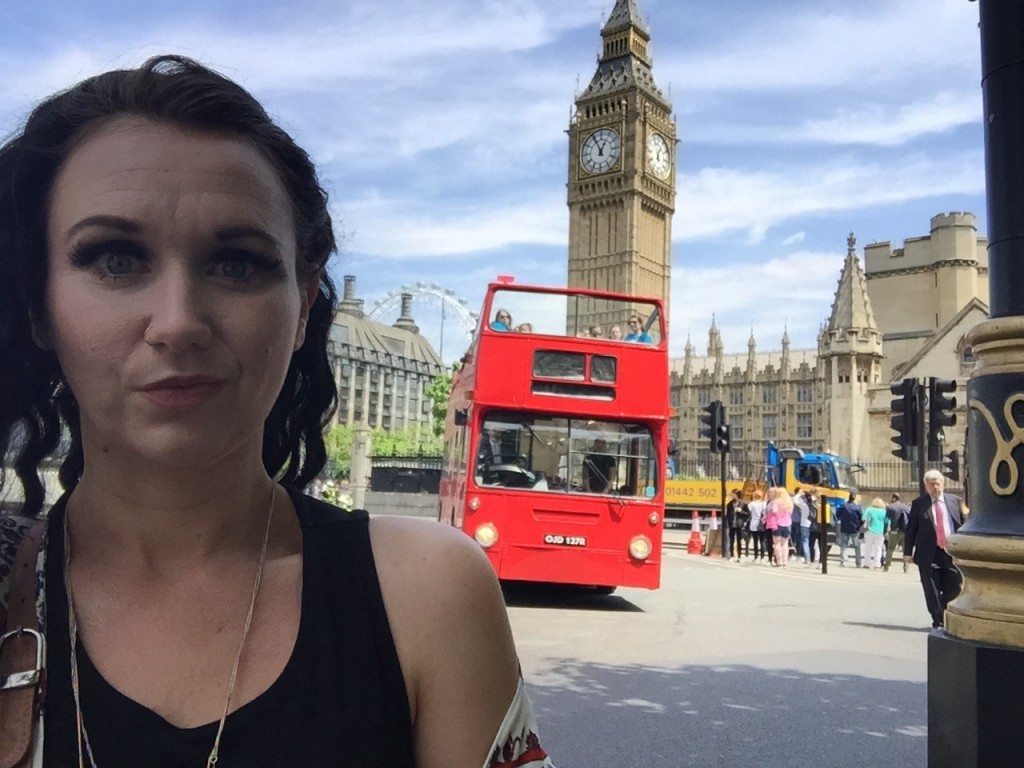 I’m already super pumped to plan my next trip. I can’t wait to go back and spend more time in SoHo and eat my weight in shortbread cookies.  A special thank you to Made, The London Pass, Memphis and The Thistle for sponsoring my visit. As always, all opinions are my own.