1.We’re constantly being mistaken for straight women at queer events.

I can’t tell you how many times that I’ve been the organizer of a queer event and had someone ask me why I was so invested in LGBT issues as a straight woman. Even queer people have this issue. If you happen to be femme and date other femme women your problems are compounded. Each person generally assumes the other is straight and doesn’t make a move. It makes it incredibly difficult to meet someone to date.

2. Parents can be blindsided when femmes come out

I came out to my mother in middle school. It was a passing nonchalant conversation.
“Mom, I think I’m gay”
“No, you’re not. You just want attention.”
“Okay, cool. What’s for dinner?”
We didn’t talk about it again until I was in college. She decided to close her ears and I decided to close my heart. To this day, our relationship is turbulent at best. I know part of the reason she had such a hard time accepting me is because her image of what it means to be gay is so limited that she had no frame of reference for a feminine teenage lesbian.

3. We feel like we have to prove our gayness

I often tell my coming out story as an unconscious way to get lesbian street cred. It’s like, if I’ve been out for a really long time then it doesn’t matter if I’m feminine. I don’t have to dig into the conversation about my identity. I’m so tired of being questioned if I’m actually gay or just “experimenting”. I hate feeling as if I have to prove my gayness in a way that gets the masculine lesbian seal of approval. Only after I’m rubber stamped then my presence in the queer space is validated.

At a bar this weekend, a masculine lesbian friend mentioned that she’d never slept with a femme. She’s only ever had relationships with women who identify as straight. I wish I could say I was surprised, but there is something about straight women that holds a hidden allure to many queer women. Femme women on the other hand are constantly being berated by both the gay and the straight world. When I asked her why she’d never dated a femme before she simply stated, “There aren’t any in Pennsylvania.” Really? Reallyyyyy? Not a single femme in PA? Meg, Party of One?

5. We’re constantly told that our passing as straight is a privilege.

Yes, it is. I will not discount the experiences of gender nonconfoming people around the world. It’s very true, I do have privilege and there are things in life I will be able to do that Trans people who do not pass and gender nonconforming people wouldn’t be able to do as easily. I also have privilege over queer women of other races, ethnicities, incomes and abilities. Dismissing femme invisibility as “not an issue” is not forming a productive dialogue. It’s the same heternormativity and misogyny that is perpetuated by the majority of society. This time it’s just the internalized kind.

6.Where do we fit in with the lesbian community?

The media stereotypes queer women as either hyper-masculine or made for male pornographic consumption. We rarely see images of actual queer women in the media. Even more rarely do we see actual queer women of color. Don’t even get me started on how much shit bisexual women get. Femme lesbians walk through life having to come out over and over again. Just once I’d like to walk past a group of queer people and get the “hey I know you’re in the club” head nod.

8. Being eroticized by straight men and misogynistic butch women

I once dated a feminine woman with long blonde hair. We lived in Washington Heights in upper Manhattan. We lived in the same apartment for two years and never once held hands or showed any form of affection towards each other in our neighborhood. Not because we didn’t want to do these things, but because we constantly felt threatened. Our neighborhood was not dangerous, but street harassment was almost constant. We’d have things yelled at us on the corner, as we walked and as men chased after us on the street.
“What a waste!”
“You ladies need a man in your life?”
“I’d love to get in the middle of that”
No one should feel unsafe walking home. No one.

9. We’re always expected to be the bottom

Femmes have a wide variety of sexual interests and desires. Some like to be dominate and some like to be submissive. Now be careful when we’re thinking about what actions determine dominance. Haven’t you ever heard of topping from below?

10. Feeling like we have to conform to be accepted.

I went through a very awkward freshman year of college stage where I felt like I had to conform to everything I saw as the “gay way.” I wore guys American Eagle Jeans and chopped off all my hair because I felt like I’d never be a part of the community if I didn’t fit these internalized stereotypes

Did I miss anything? When was a time you felt invisible? Let me know in the comments below.

We interviewed Celesbians on the Red Carpet at Dinah Shore 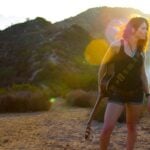